Chelsea isn’t new to the camera but she’s new to my camera. Thankfully she’s also very patient in front of the camera, as these three-light setups I photographed her with took me longer to setup than I care to admit. Using a variety of Alien Bees lights and modifiers, Chelsea and I put together a casual lounging around look, and a sexier lingerie look. Read on to see how it was done, complete with lighting diagrams. 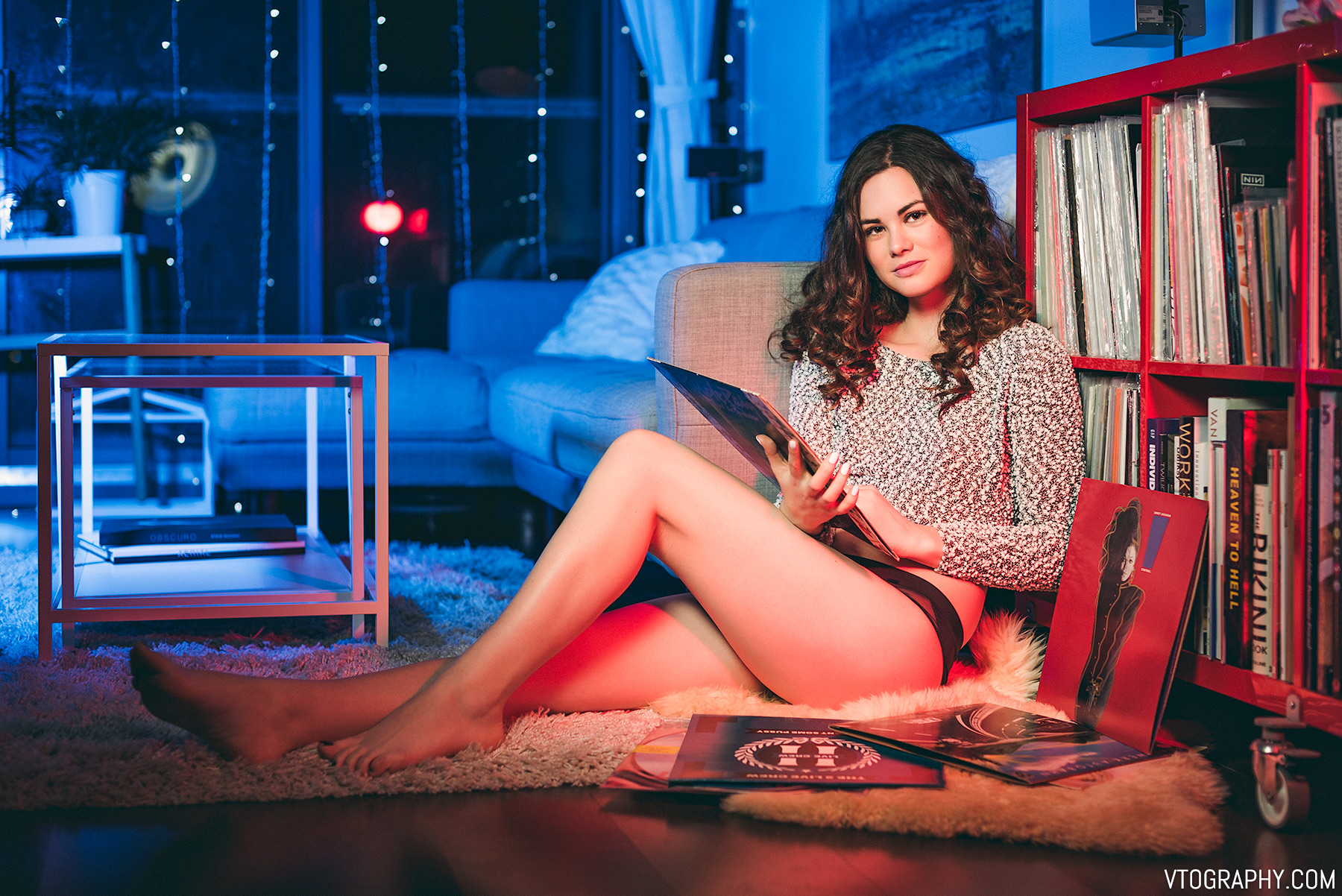 My friend Julia introduced me to Chelsea a couple months ago and I knew right away I’d need to photograph her. Luckily, Chelsea has experience in front of the camera and she was totally game for whatever I cooked up. You’ll probably be seeing a lot more of her soon.

First, let’s talk about the equipment and then I’ll tell you how I used it. This is a list of everything I used on these two different lighting setups: 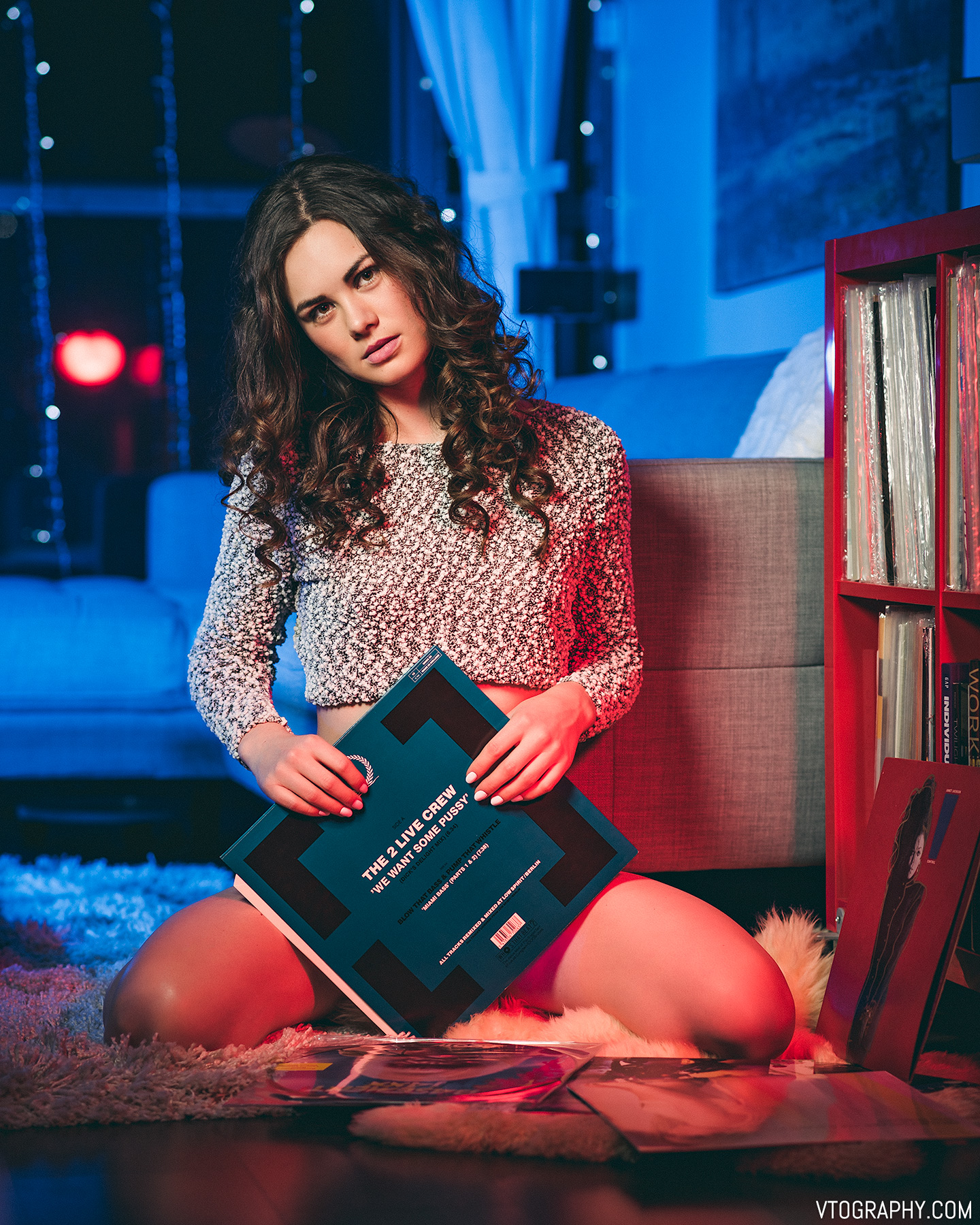 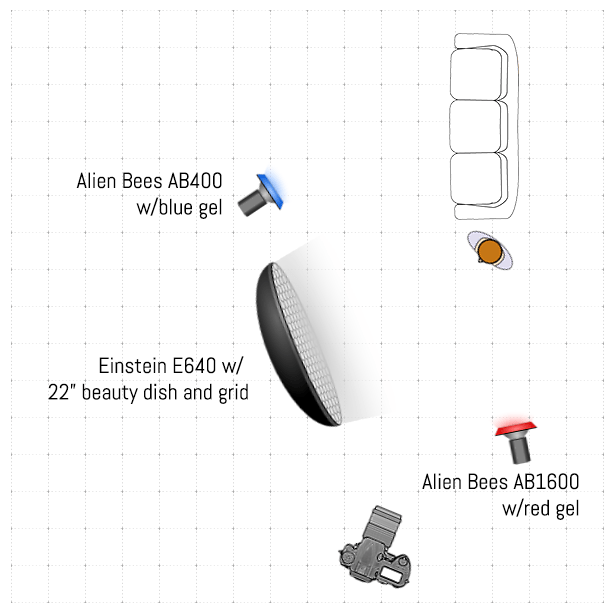 Chelsea picked out a sweater and some Calvin Klein bottoms from my collection to wear for these shots. I grabbed some classic vinyl records from my shelf for her to interact with (Prince, Janet Jackson, Britney Spears, 2 Live Crew, Kraftwerk, and Basement Jaxx). Once she was in place, I setup the Einstein light and 22” Beauty Dish (with grid) to camera left as the main light. The second light was an Alien Bees B1600 light with a blue gel and it was placed to light up the background. The Alien Bees B400 was the third light, with a red gel and 10° grid, and it was placed to camera right and aimed at Chelsea’s lower half to add a little more red to the scene. This was done to compliment the existing red cabinets and provide a nice contrast with the blue background. 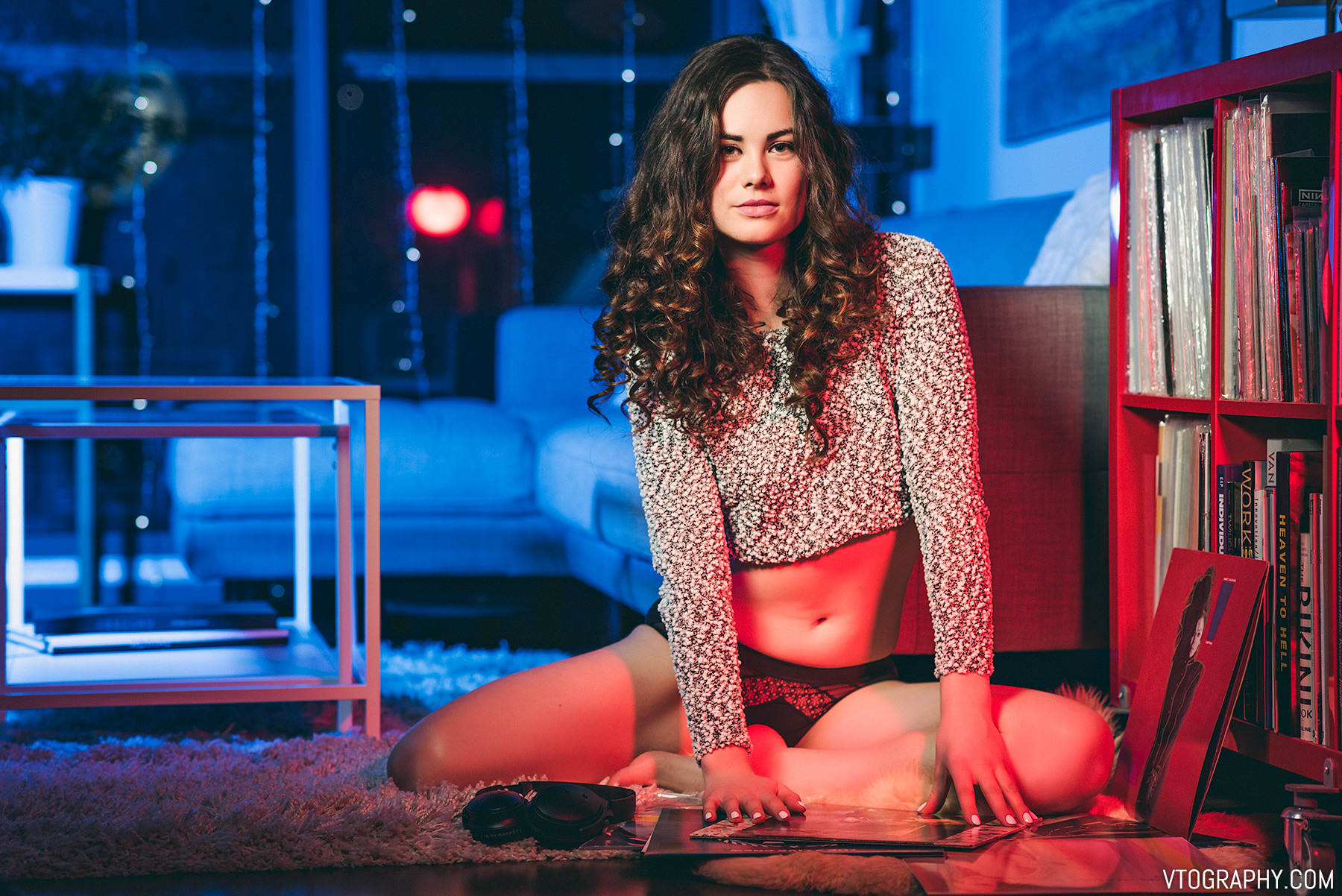 With all the lighting firepower, I had more than enough light to use a small aperture, but I opted to keep the lights at low power so I could use an ƒ/2.8 aperture to blur out the background elements. Most of these were shot with the Nikon 85mm FX ƒ/1.8G AF-S Lens but one was shot with the Nikon 50mm FX ƒ/1.4G AF-S Lens for a slightly wider look. These two full frame lenses combined with the Nikon D750 full frame camera made it easy to get a satisfying blur in the background. 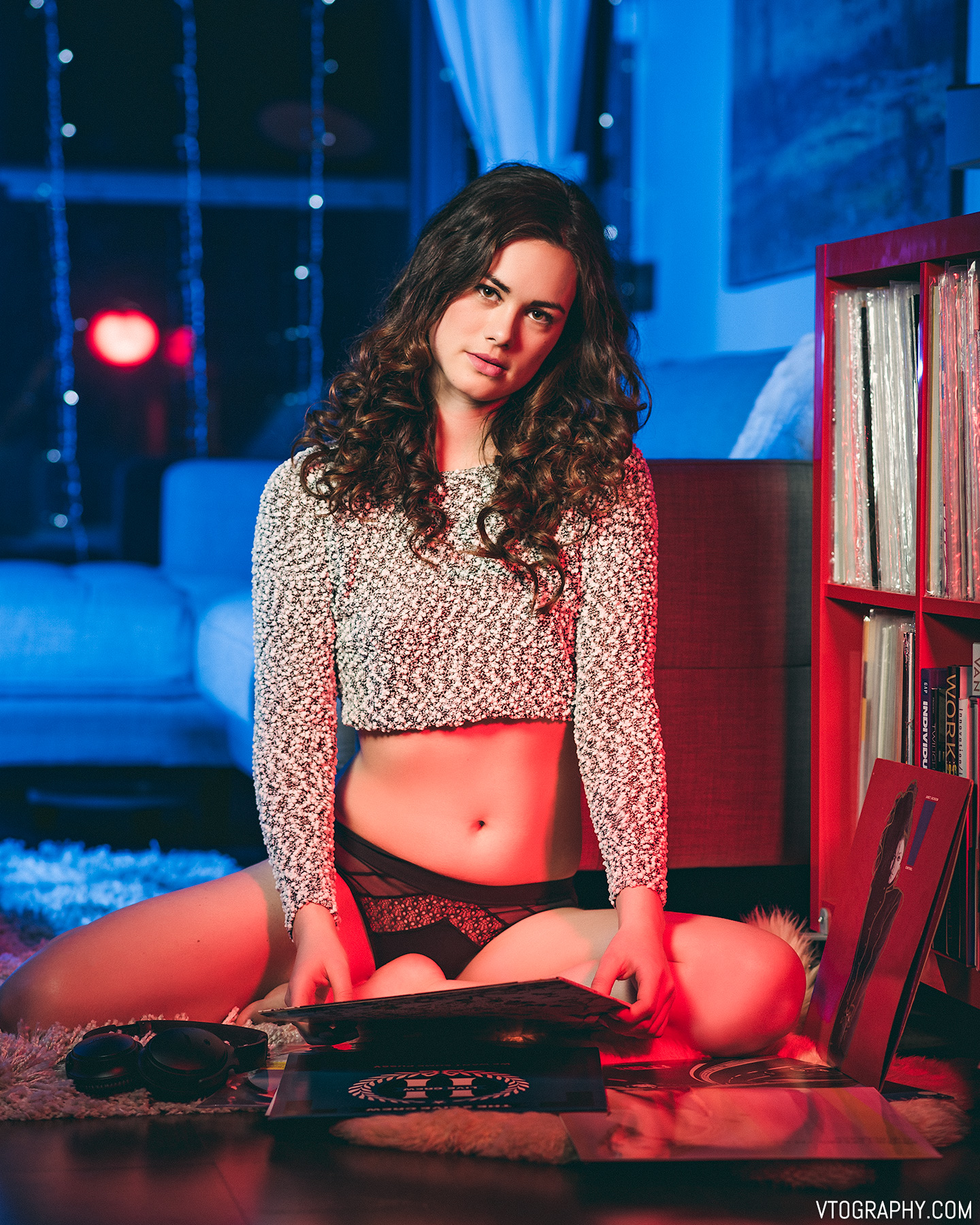 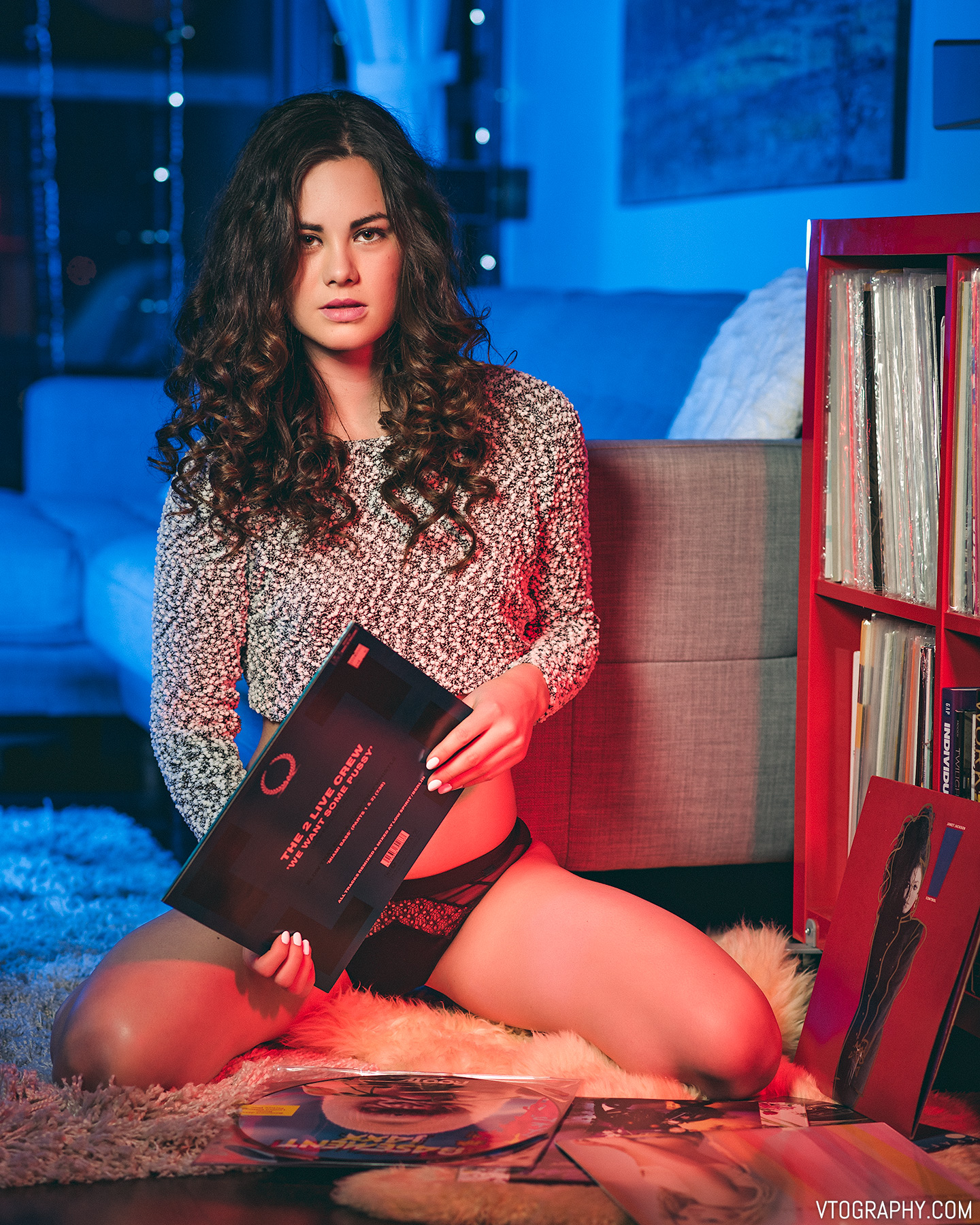 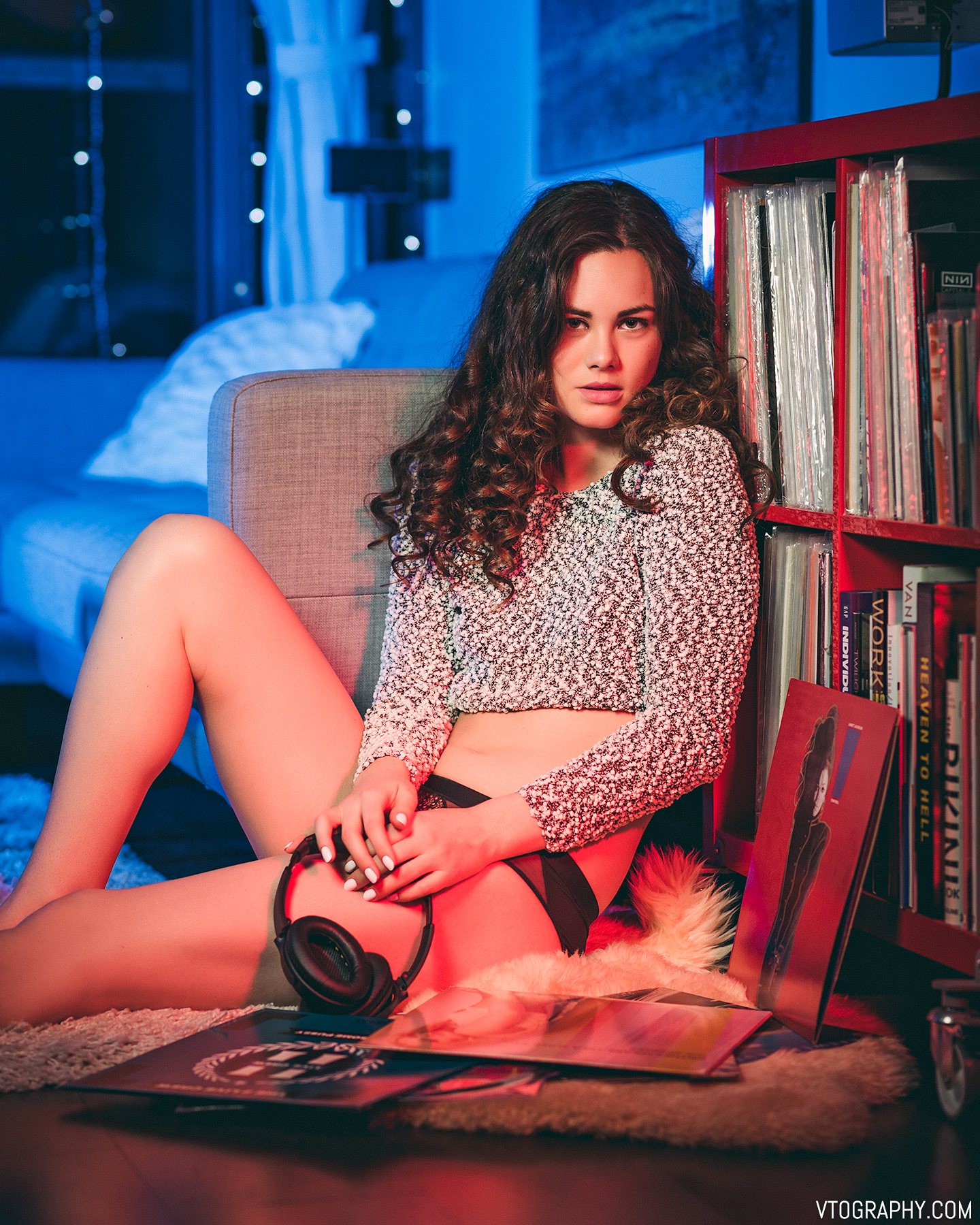 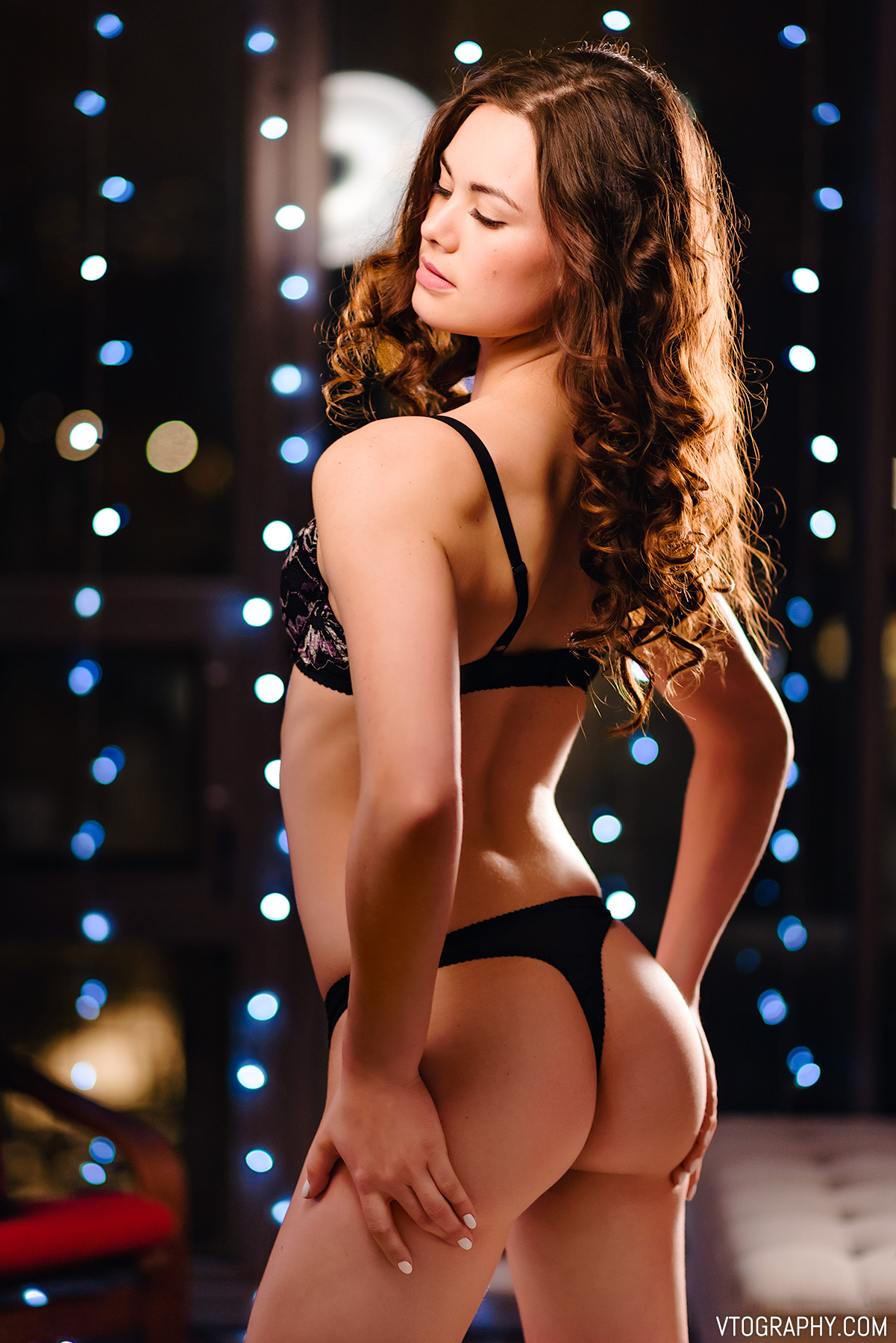 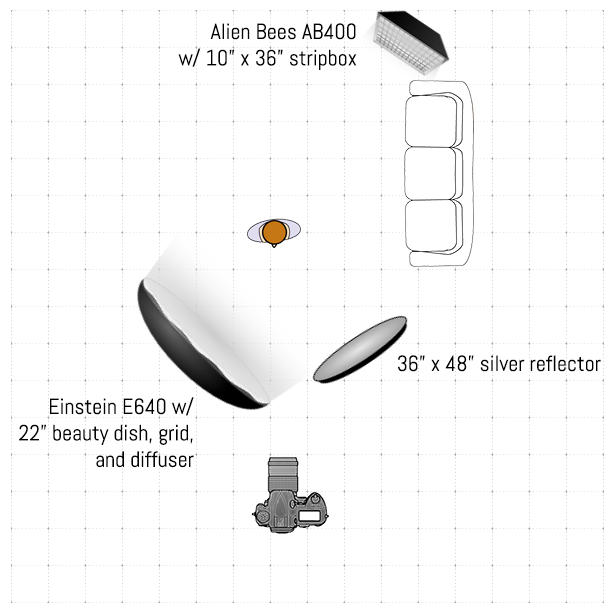 This second look was put together from a couple lingerie items I got on clearance at La Vie En Rose a few years back. For the lighting, let’s start with the background: strings of LED lights from Amazon provided the little glowing bokeh balls. In front, the main light to camera left was once again the Einstein with 22” Beauty Dish. This time I popped a diffuser over top of the grid (a bit unconventional, but it worked) for softer light. To camera right, the second light wasn’t a light at all (I cheated, sorry), but instead a 36”x48” Silver Reflector (positioned low) to bounce some light on to Chelsea’s lower half. Behind Chelsea, to the right, was the third light — an Alien Bees B400 with 10”x36” Stripbox and grid to provide a nice edge highlight. 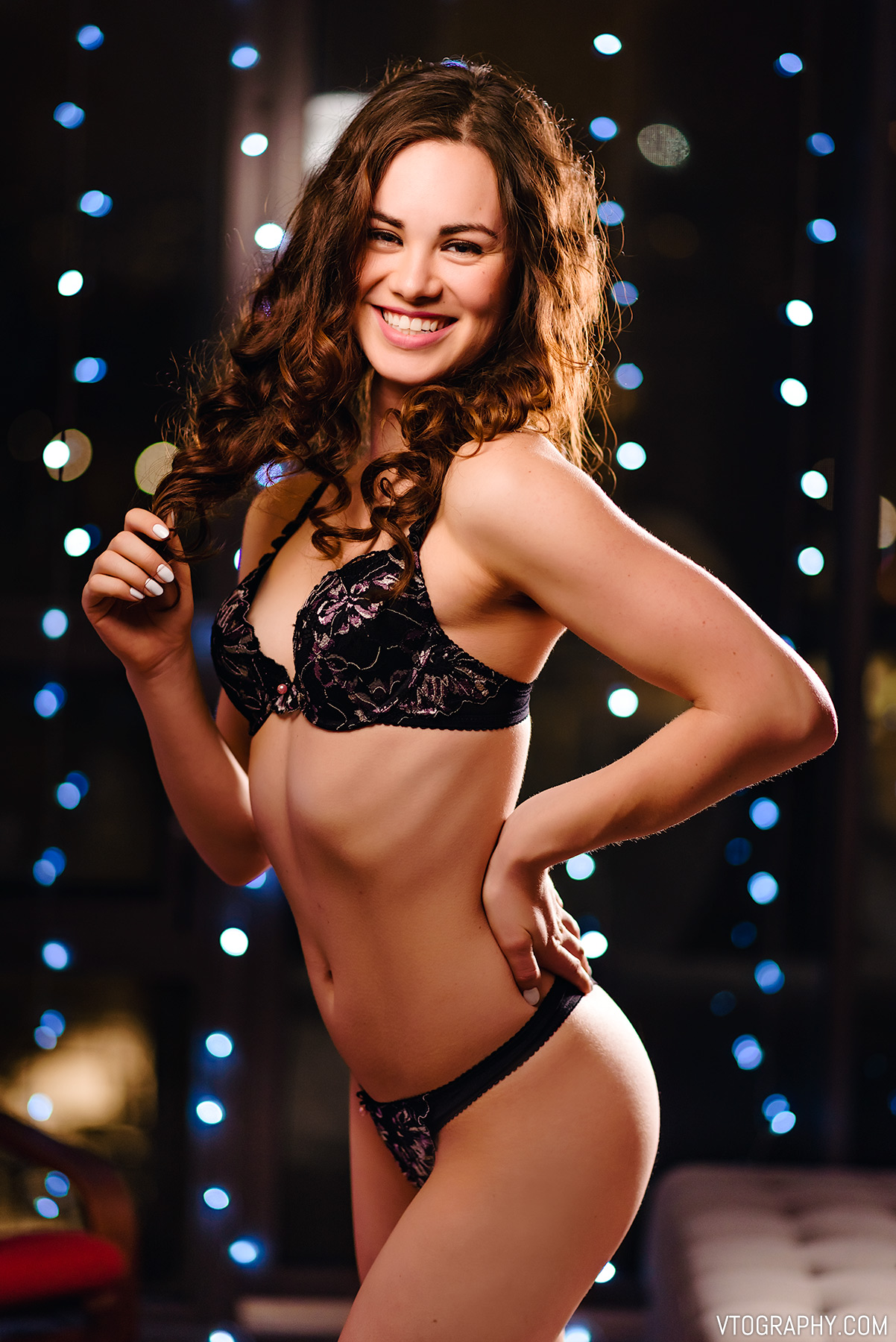 Because the light emitted from the LED strings was so low, I had to really open up my aperture for these shots to ƒ/2.0, and dial up my aperture to ISO 500. Using a wide aperture lens like the Nikon 85mm FX ƒ/1.8G AF-S Lens and a full frame camera body like the Nikon D750 allowed me to both capture enough light and also blur out the LED lights into pleasing, glowing balls of light. This same look isn’t as achievable with cameras with smaller sensors or lenses with smaller apertures. 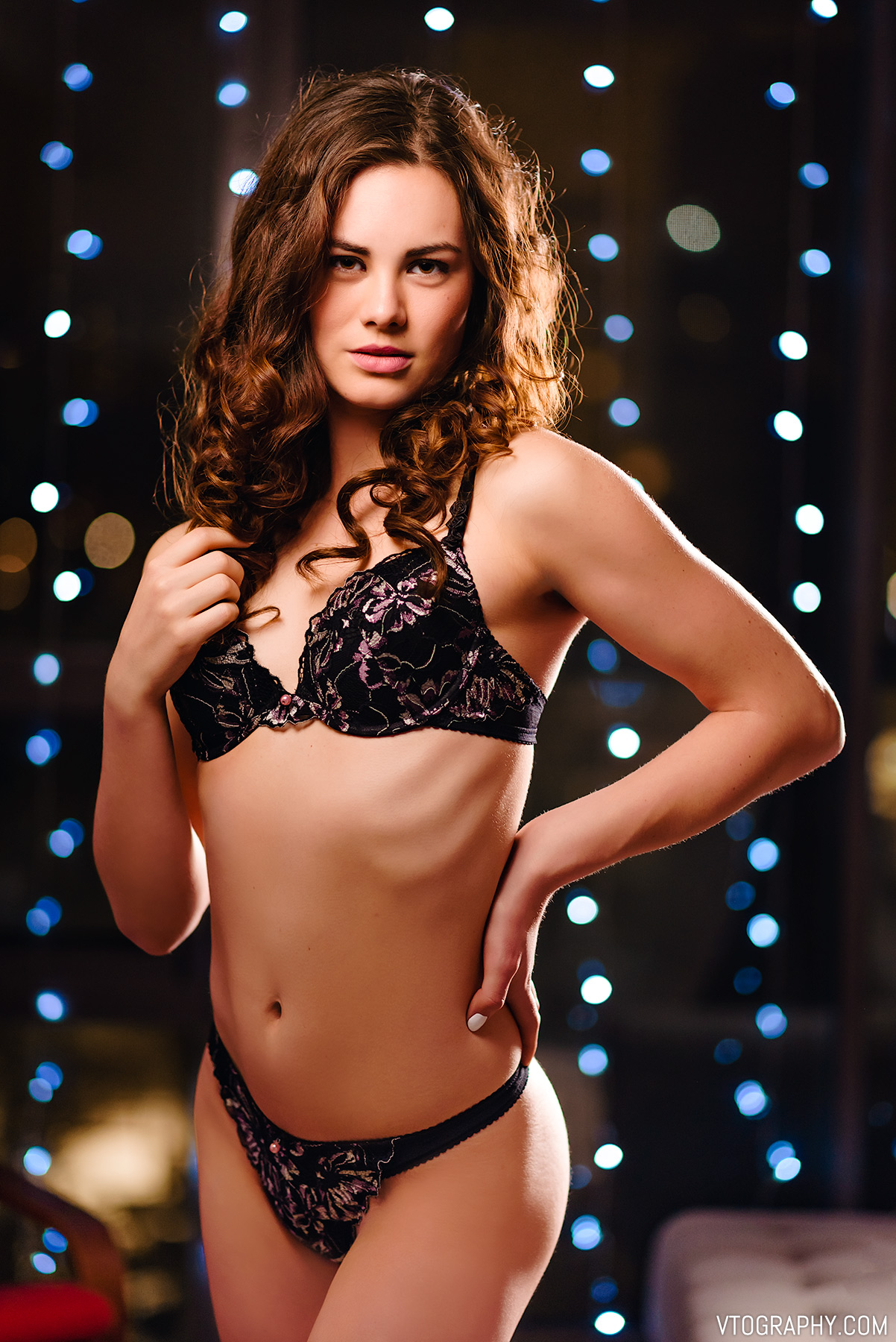 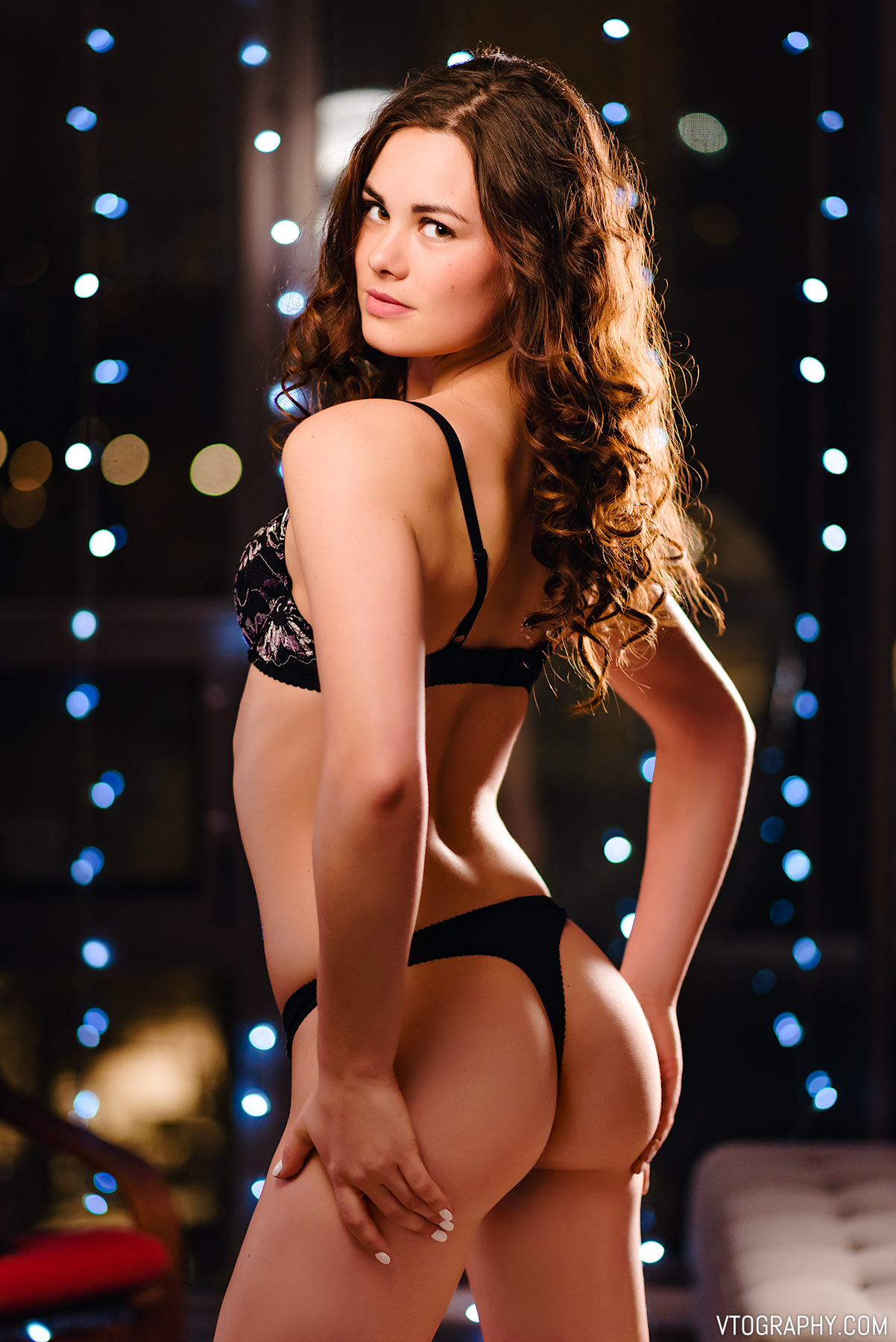 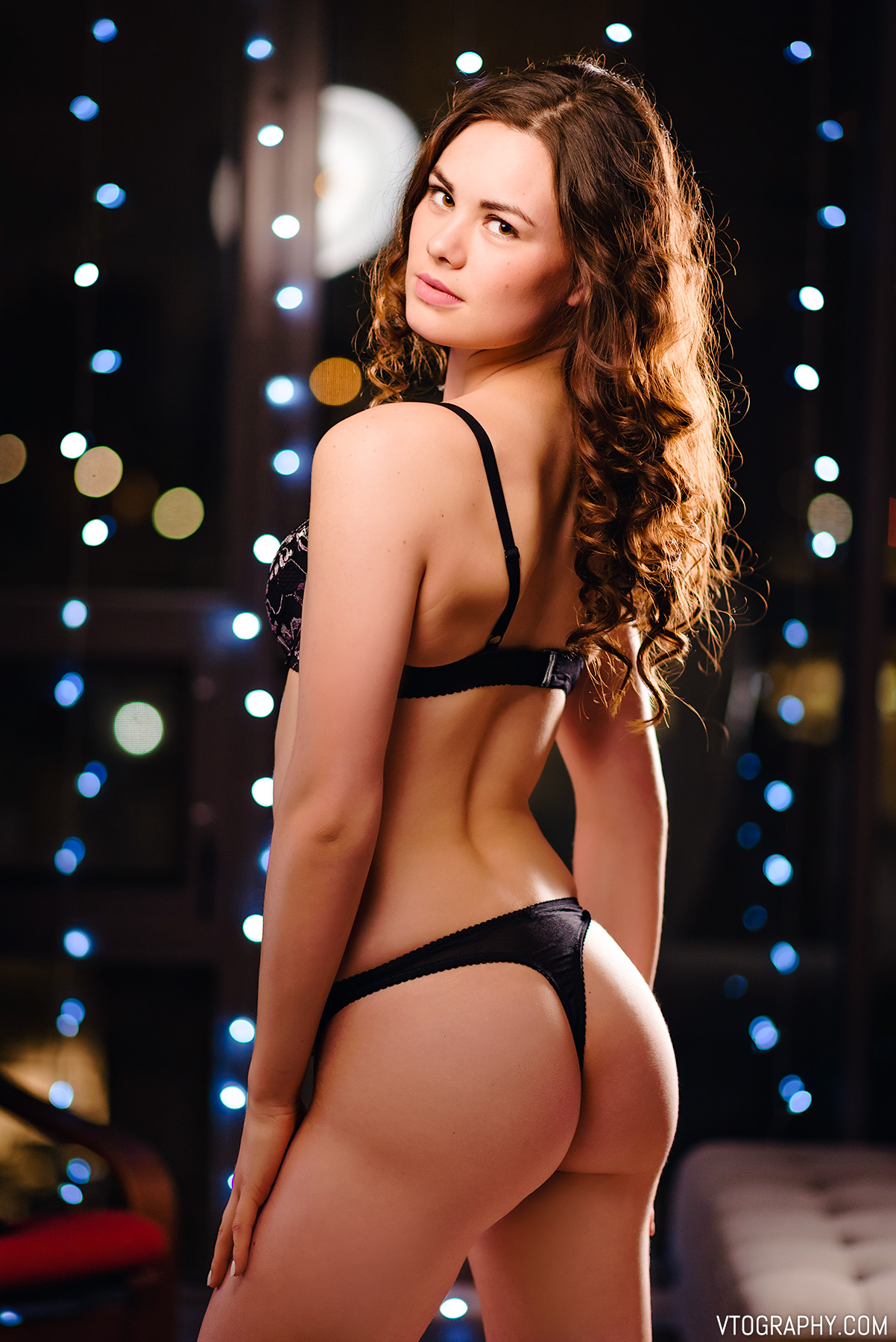 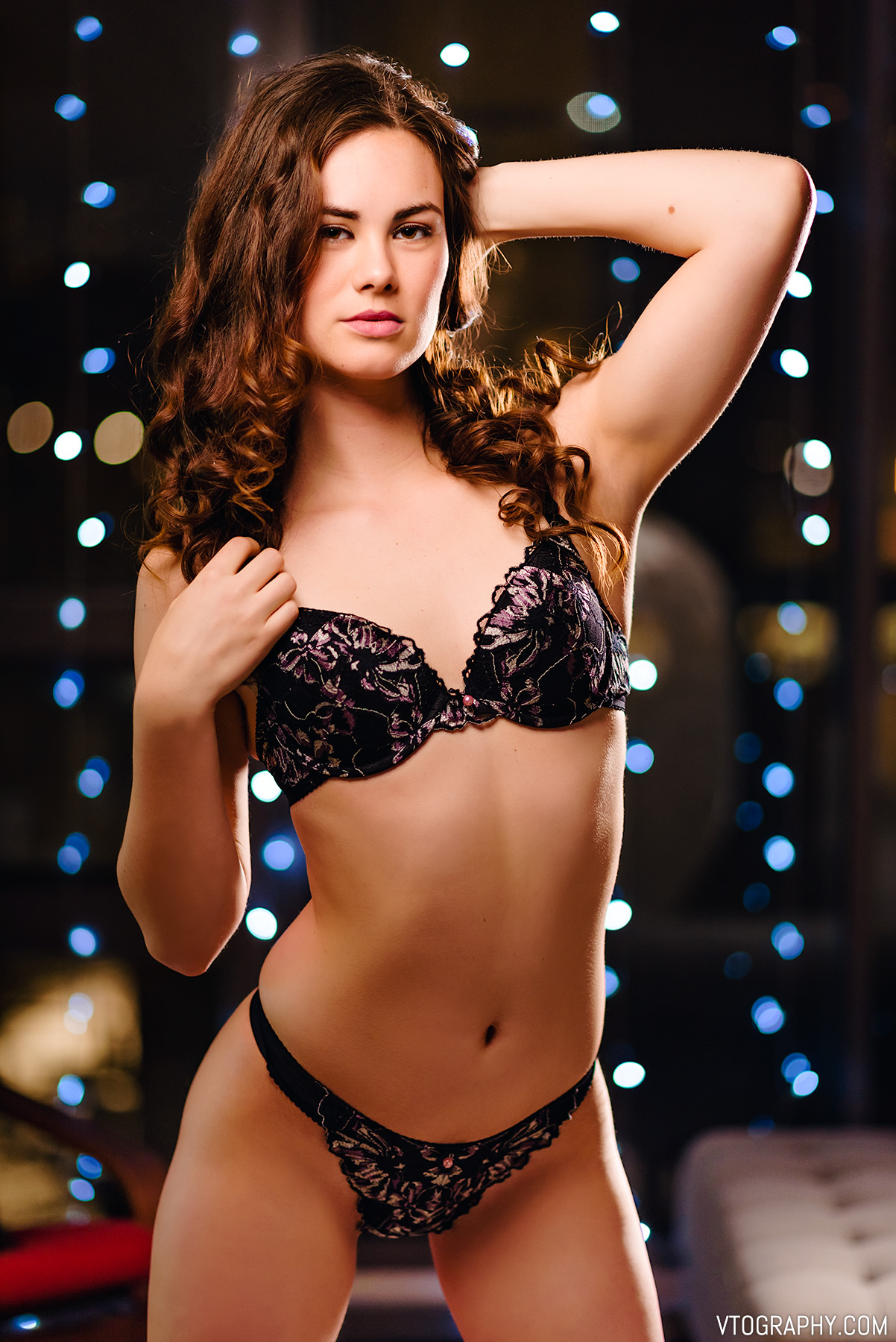 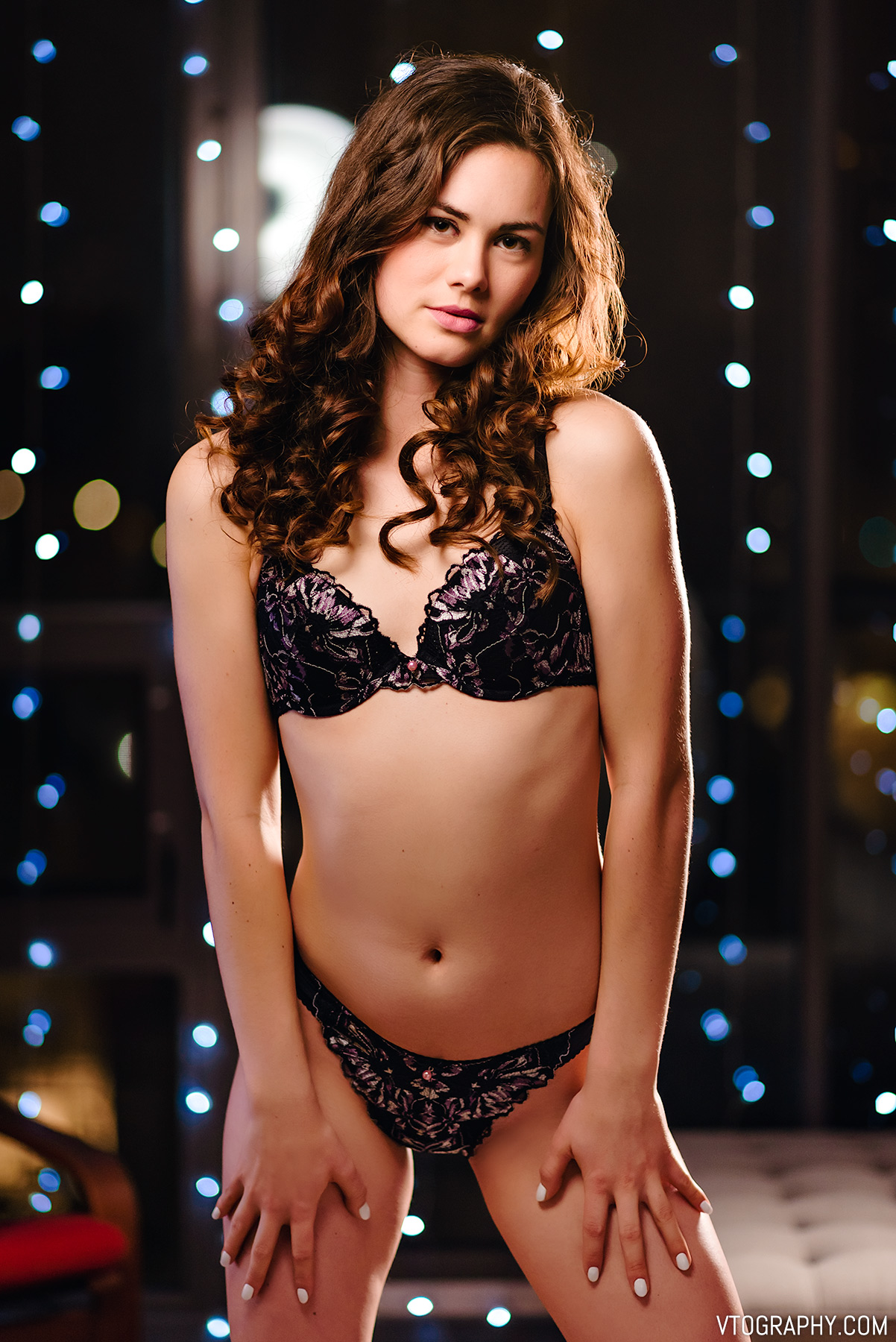 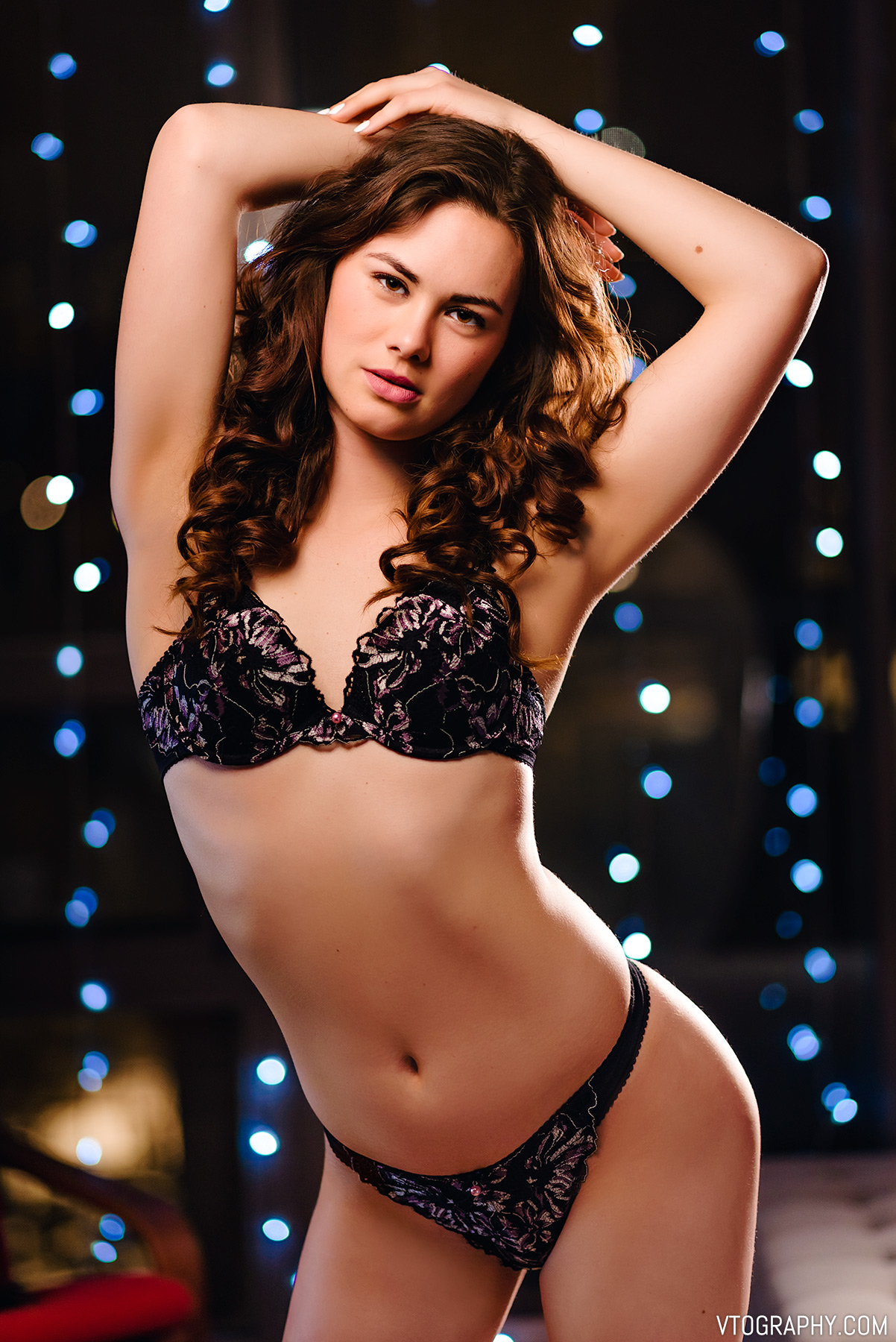 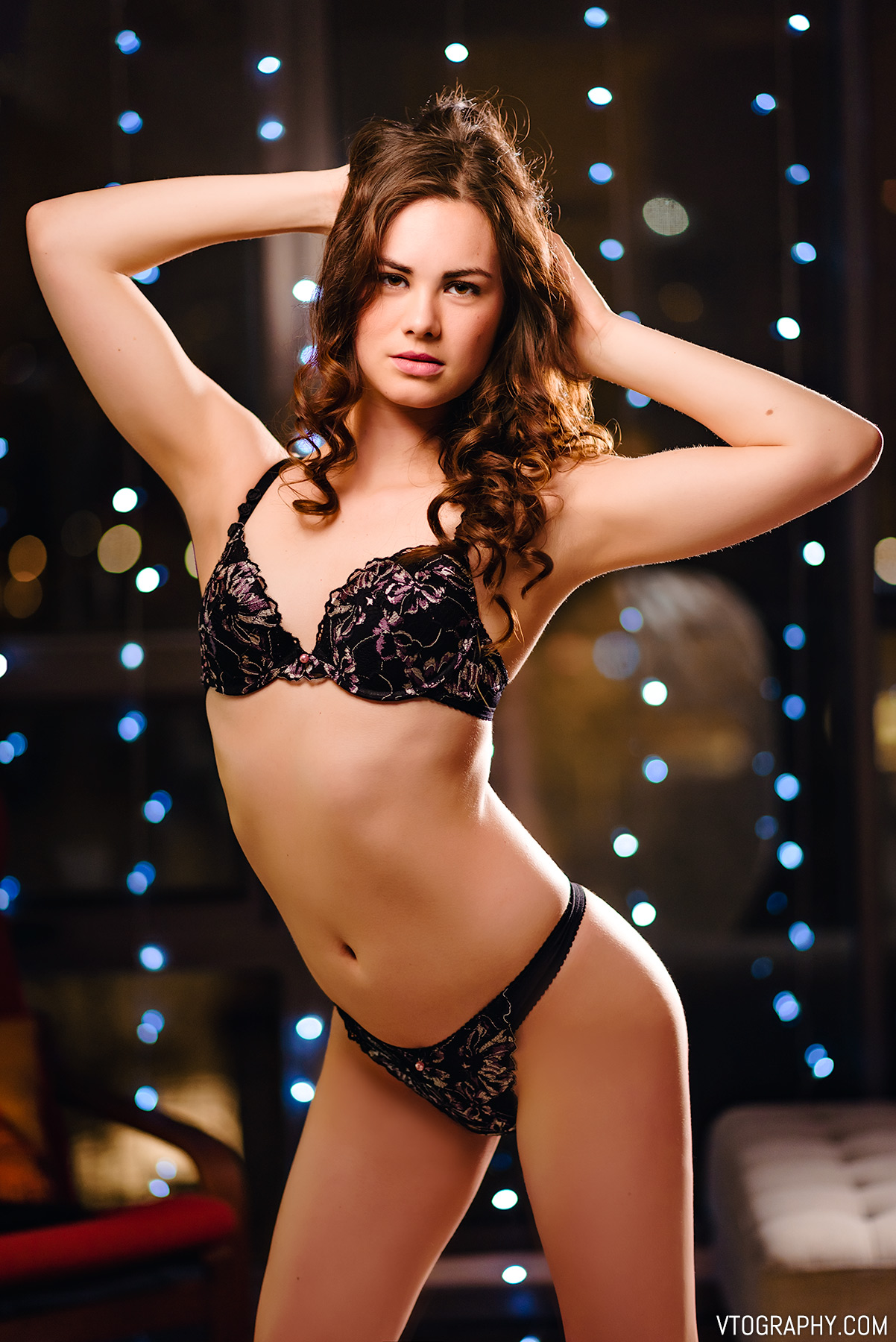