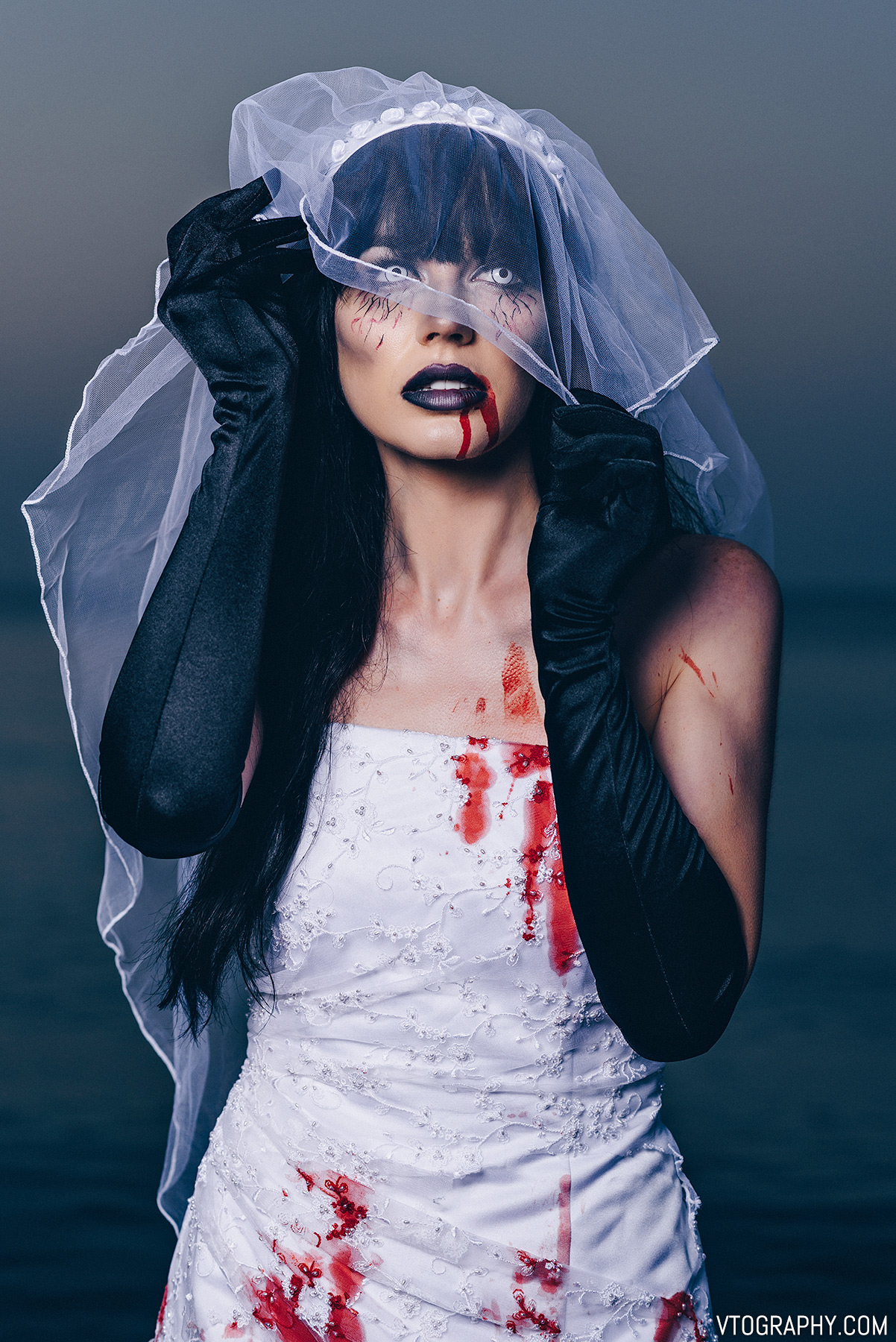 When Ashley asked me if I wanted to photograph her in her Halloween costume, I hesitated. I’m not really into creepy/gory stuff, and after all, how cheesy do most Halloween photo shoots look? After she explained her concept to me, though, I agreed. Presenting… Ashley The Zombie Bride!

So Ashley’s concept was not only to be a zombie bride, but it was to be a zombie bride emerging from the water. I thought it would look a bit out of place to have something so creepy emerging onto a sunny beach in the middle of the day, so I suggested we shoot just before sunrise, when the light is dim and has a blue cast.

I knew the pre-dawn light wouldn’t be enough on its own to really make Ashley’s zombie bride look pop off the background, so I hauled along an Alien Bees AB1600 monolight strobe to light Ashley. Placed atop a Manfrotto 1004BAC light stand, I used a Westcott 43” collapsible umbrella to diffuse the AB1600 and get a nice even spread of light.

In retrospect, the AB1600 was overkill and I could have used the lower-powered AB400 instead. I ended up using the AB1600 on its absolute minimum power setting for most of the sunrise.

The Manfrotto 1004BAC light stand is my go-to stand for indoor work as it’s fairly large and sturdy. Usually for a location shoot such as this, a more compact stand like the Manfrotto 5001B Nano stand would be a better, more lightweight travel partner. I was concerned, though, about the stand possibly toppling over from strong winds, so I had two choices: either bring a large, heavy sandbag (thus defeating the purpose of carrying a small, lightweight stand) or bring a larger, heavier stand that could withstand some wind on its own. I chose the latter, which was the Manfrotto 1004BAC. One neat thing about these stands is that when you have multiples, they can be neatly clicked together with their built-in locking system for transport or storage.

The Westcott collapsible umbrella is my new favourite lighting tool. I’m tired of umbrellas in general (they have their place, but I prefer a beauty dish or an octabox), but the Westcott is so incredibly compact to carry around that there’s no excuse not to have one in your bag at all times. When collapsed, it’s a minuscule 14.5” long!

Despite my choice of the “heavy” light stand, I still wanted to be close by — within arm’s reach — if the wind was too strong. For that reason, I shot many of the first images with a 50mm lens. That way, I could be right next to the stand at the edge of the water, while still keeping it and myself close enough to Ashley for soft light and a full-length framing. Once I was satisfied that the stand wasn’t going anywhere, I switched to an 85mm lens and moved in a few feet closer to Ashley for some tighter shots.

Ashley put together this little video from some of the footage we shot:

Ashley used a thrift store wedding dress that she tailored herself, she did her own makeup, she snagged the black gloves from my collection, and a bottle of special effects blood completed the look. Follow Ashley on YouTube, Instagram, and Tumblr.

See all of Ashley’s zombie bride Halloween photo shoot below 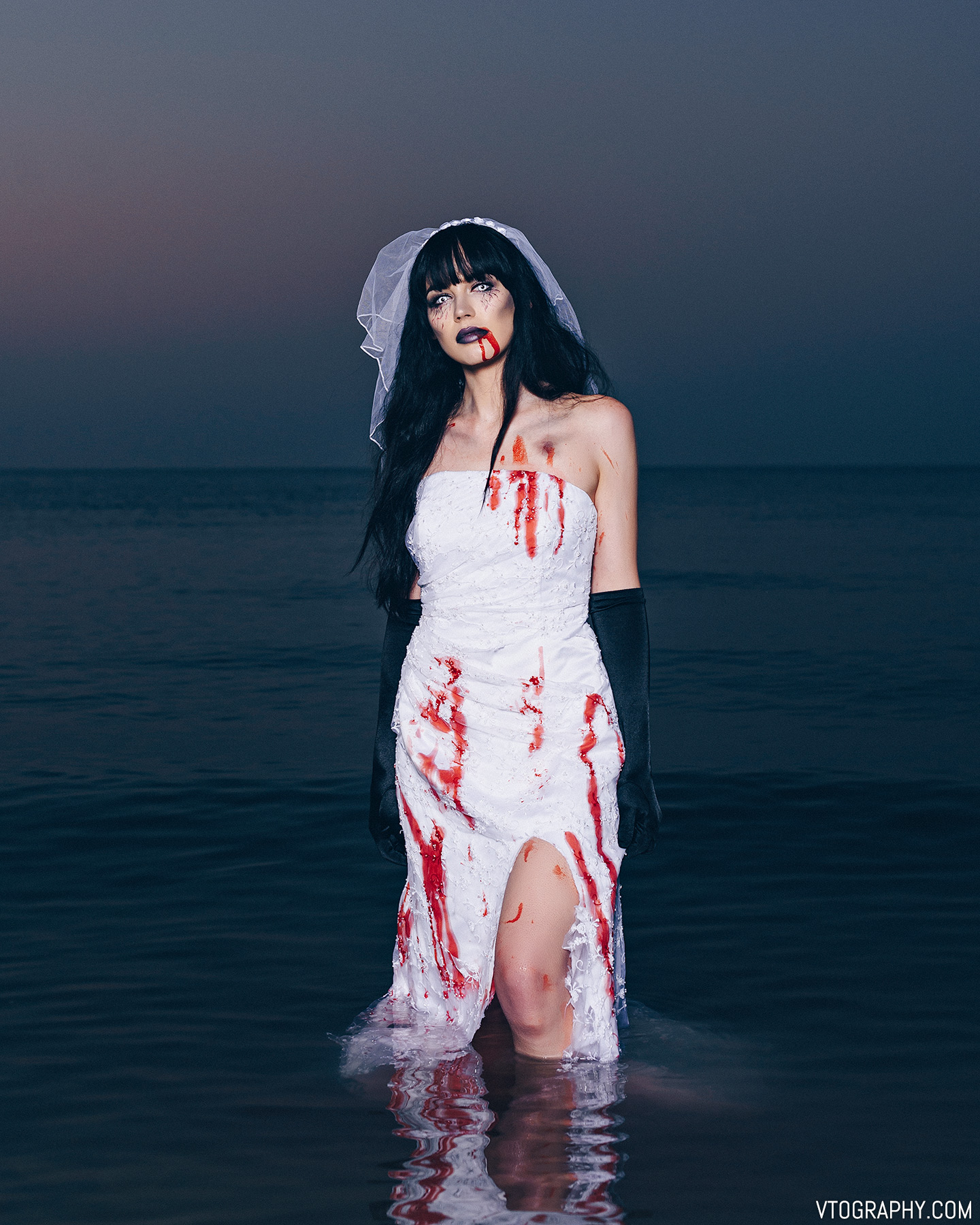 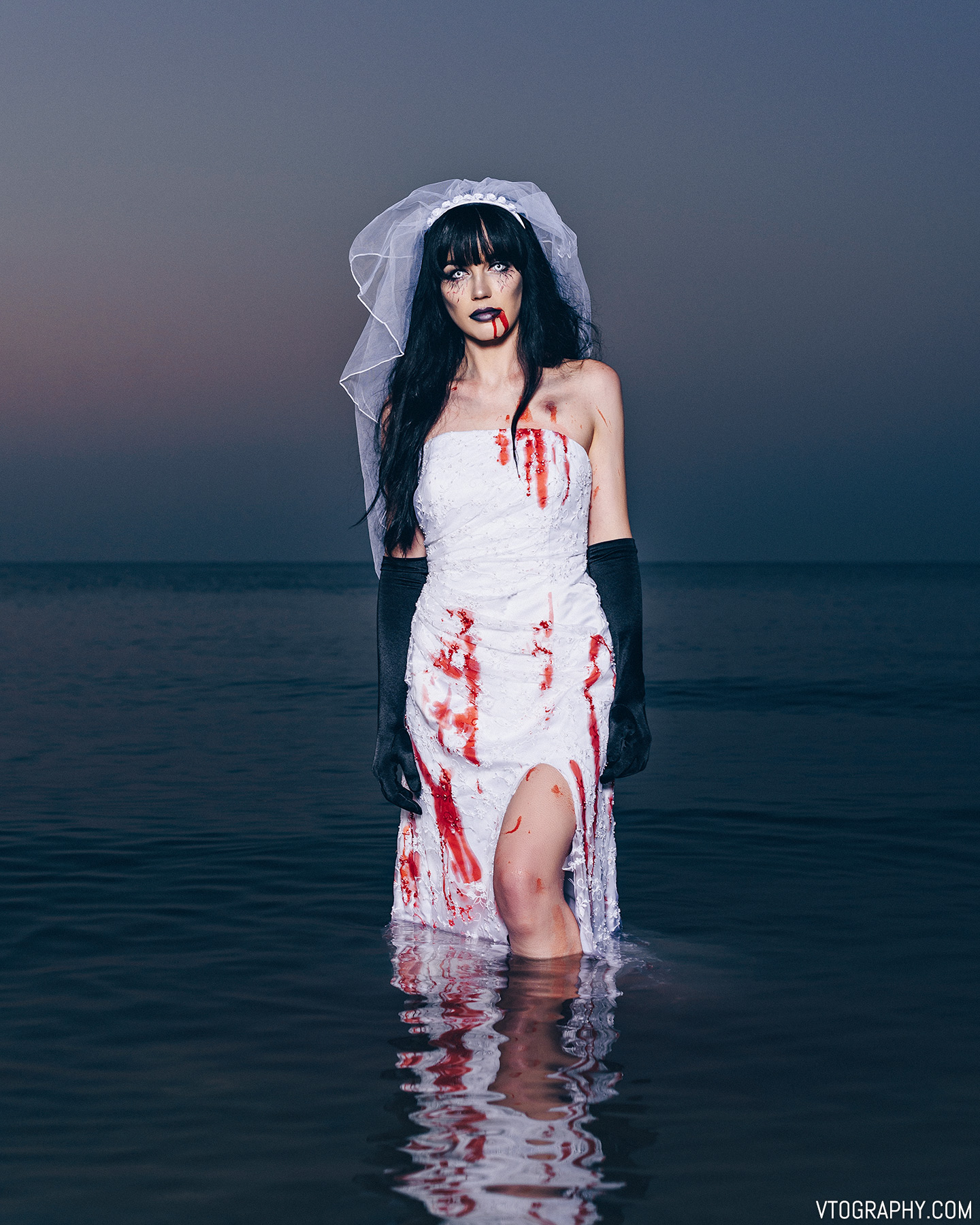 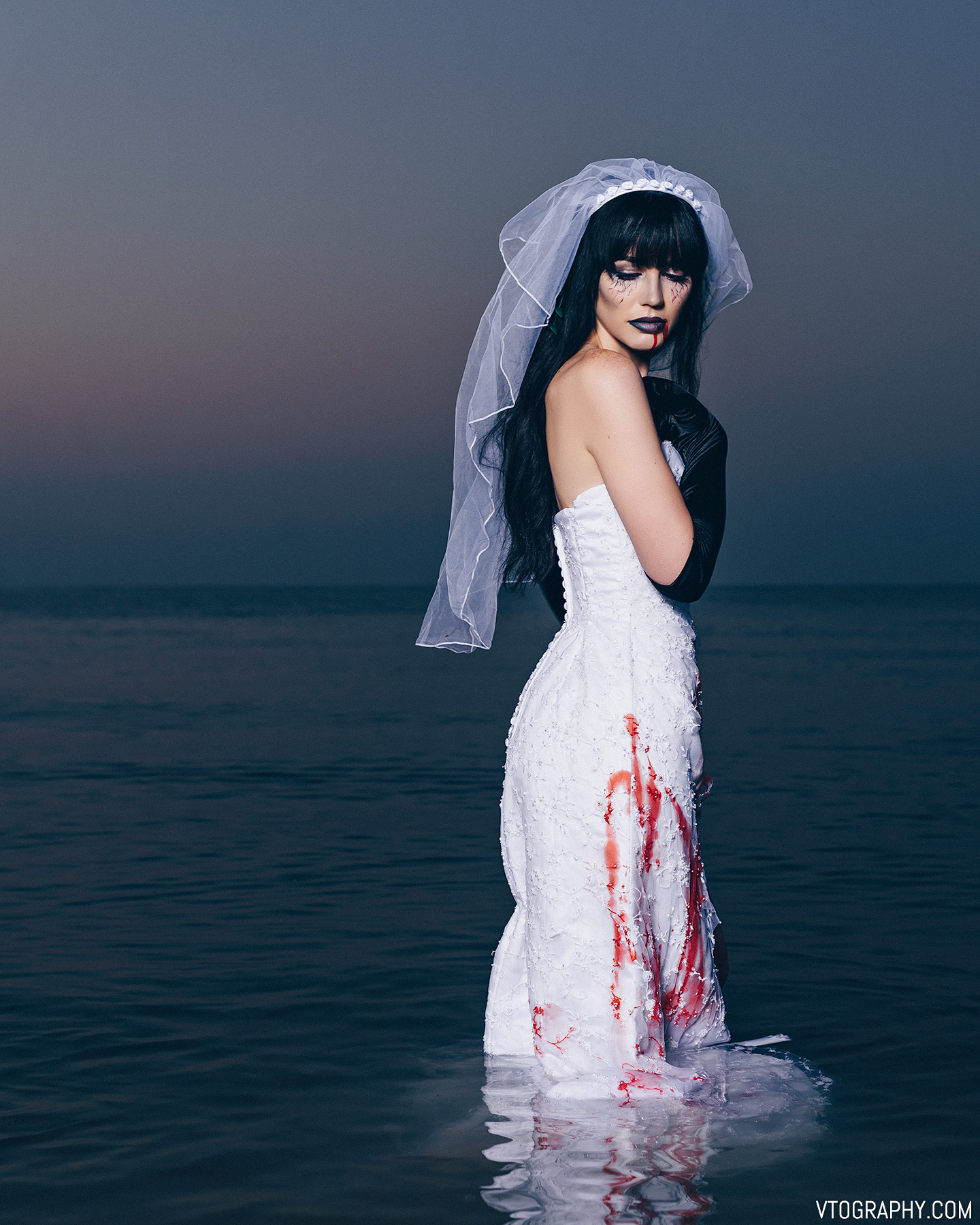 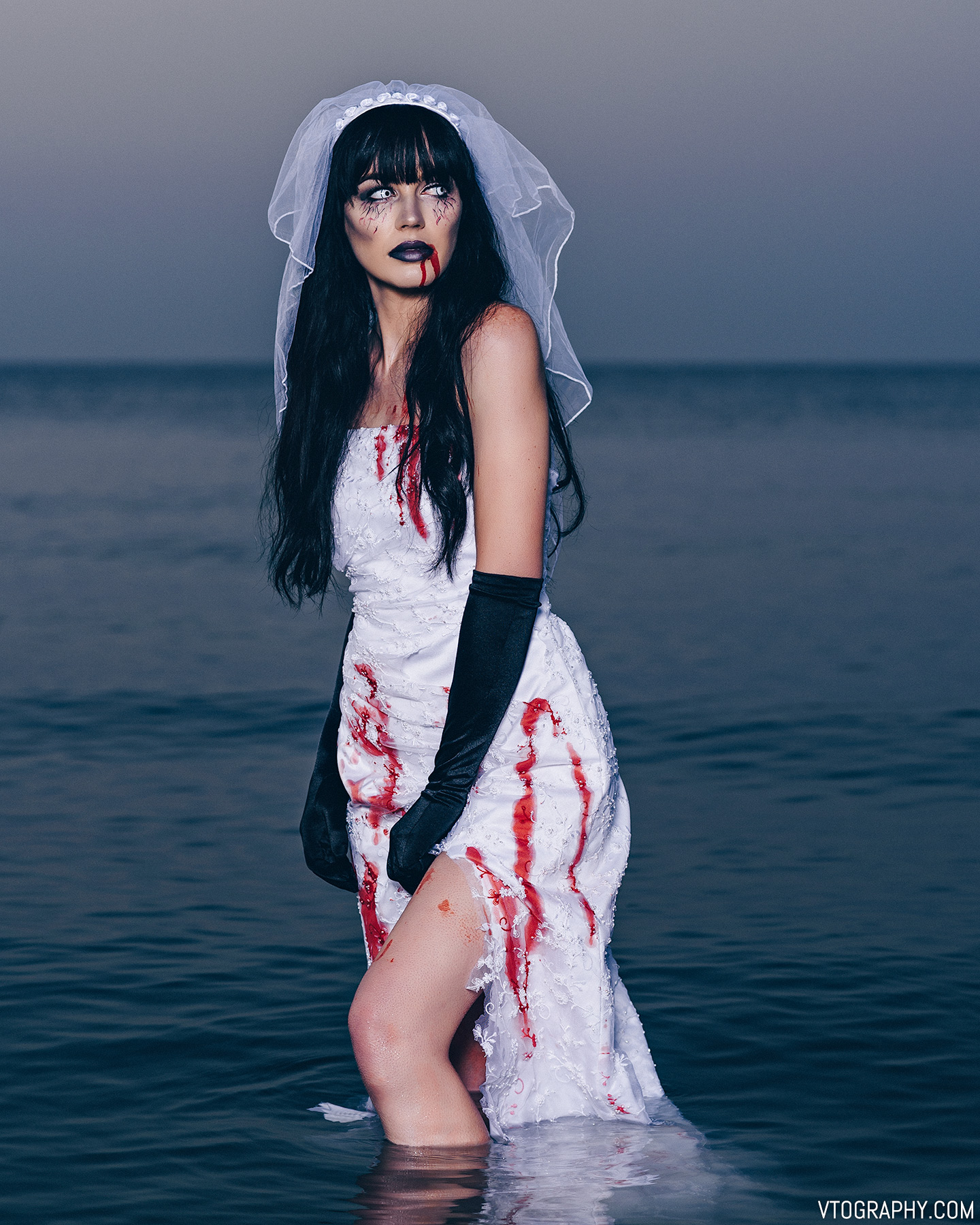 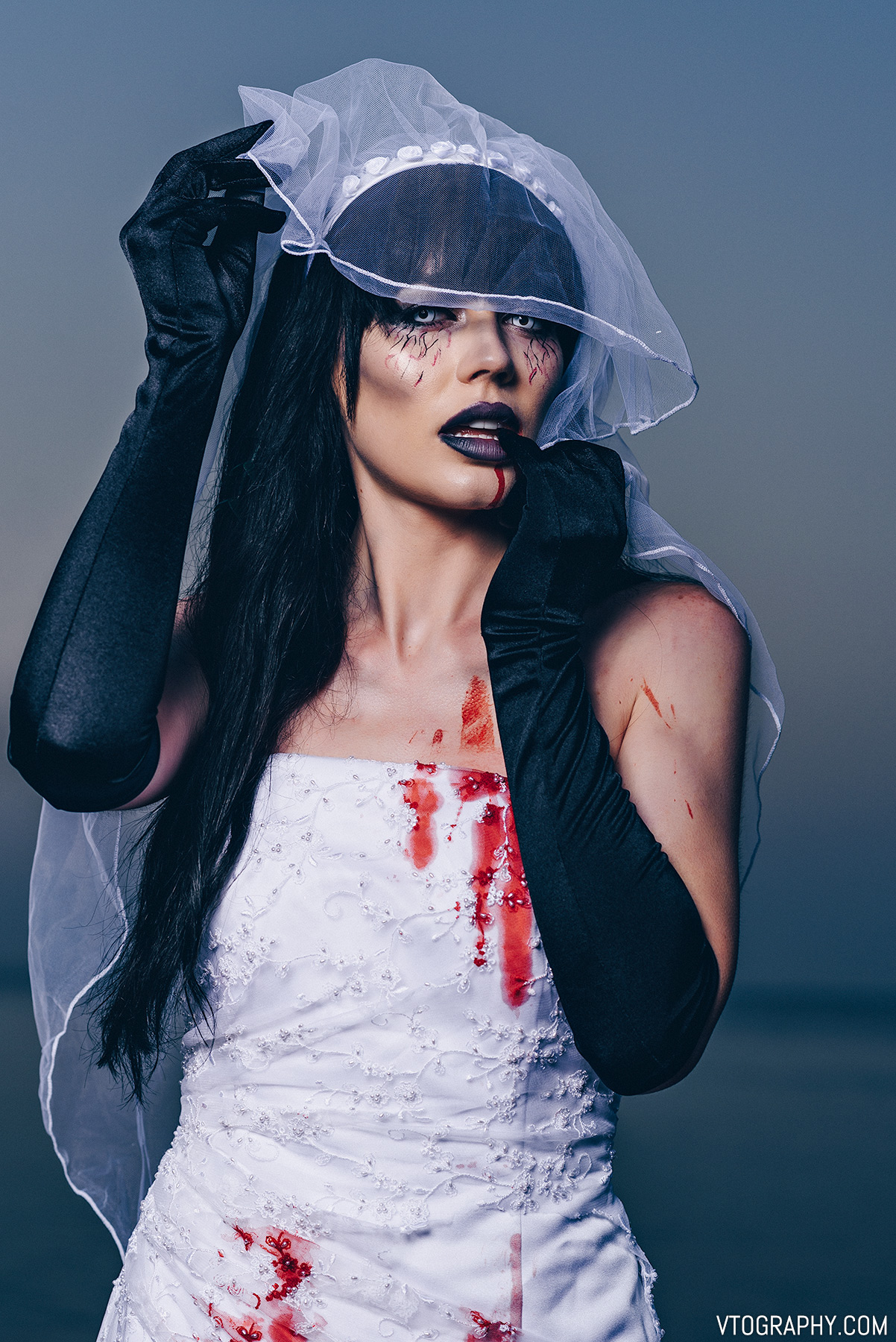 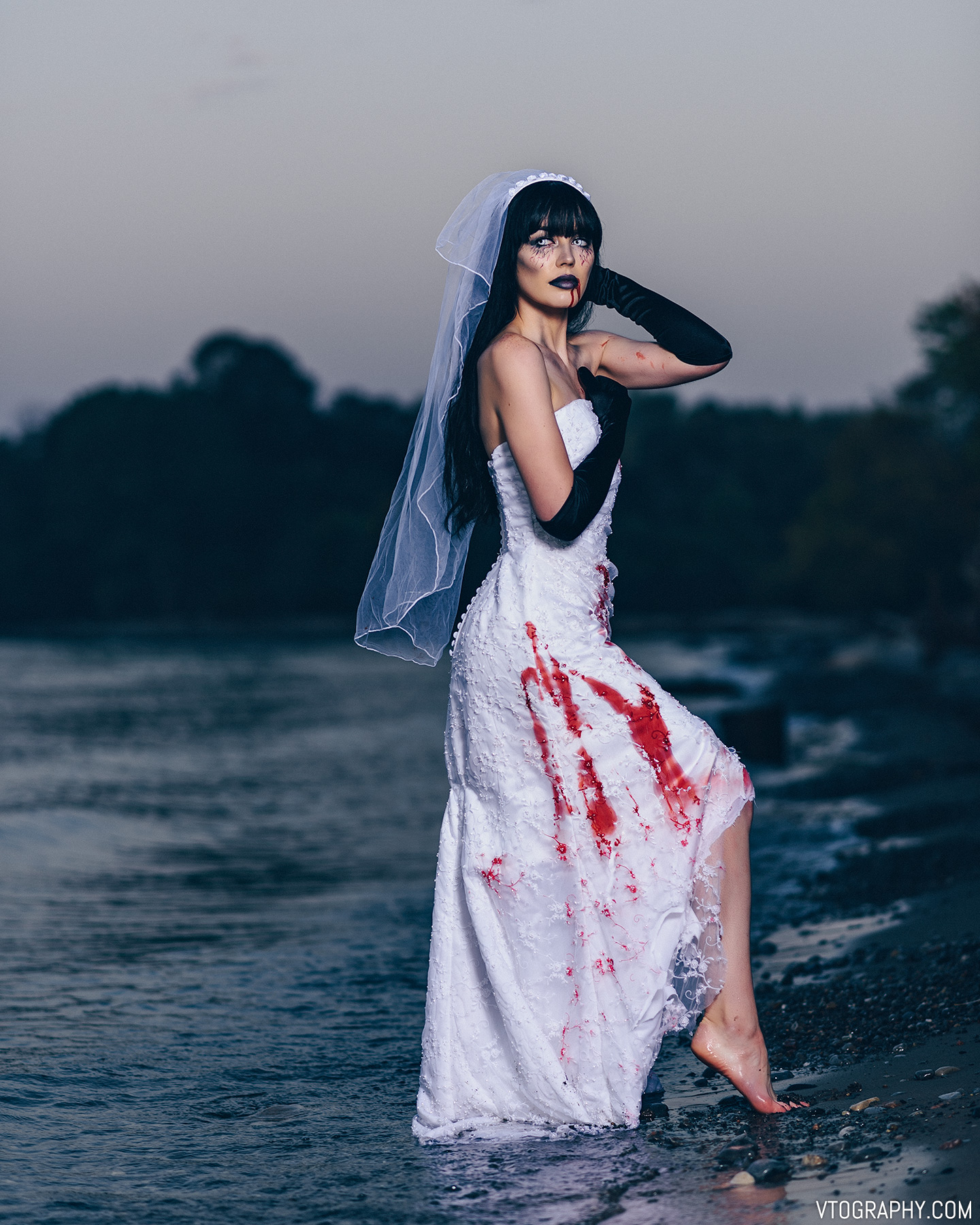