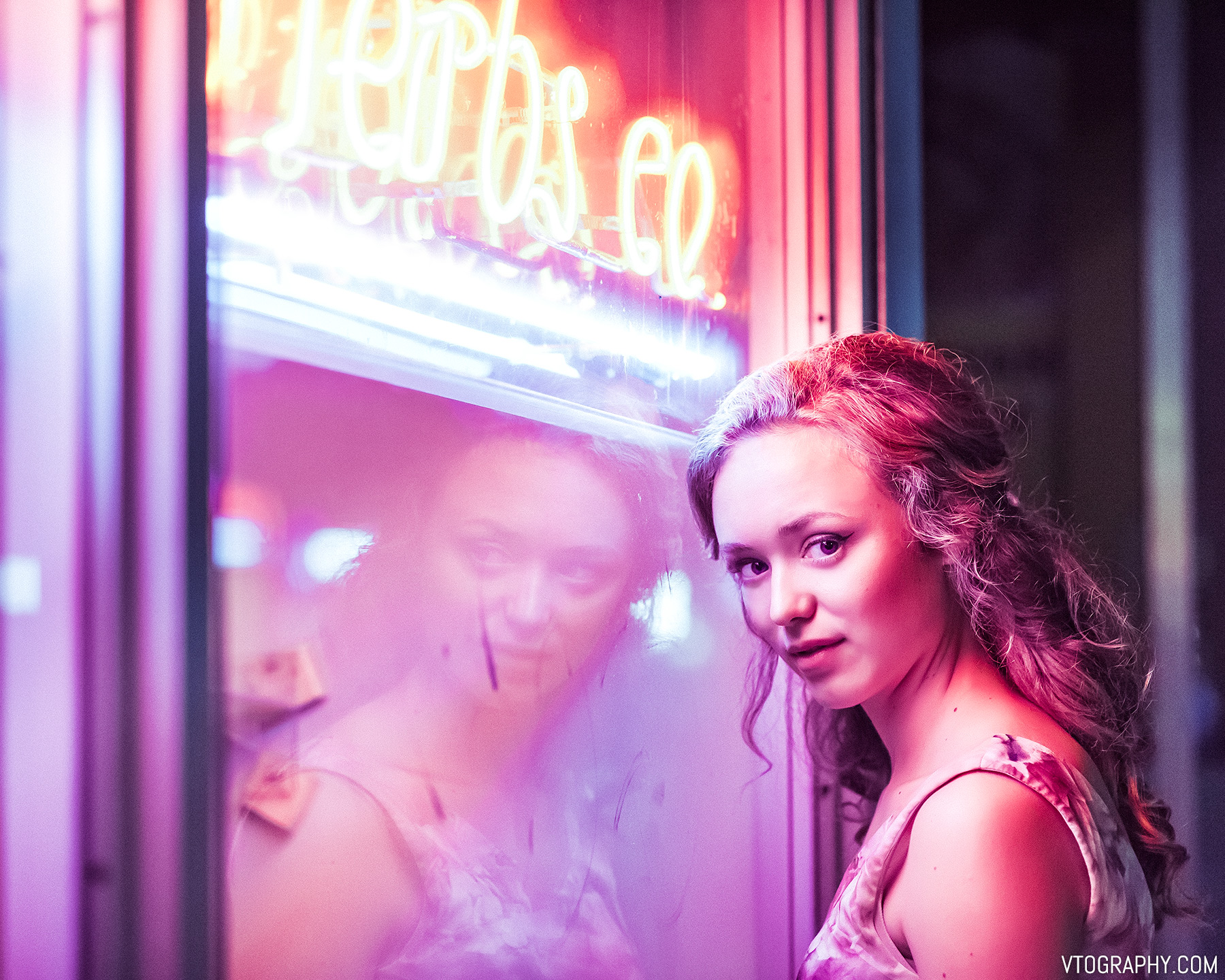 Neon portraits are something I’ve been thinking about for a little while. Since my friend Kathryn and I both live downtown, surrounded by shops with neon signs, I had a perfect opportunity to try out some neon portraits with her. See our results in the gallery below.

With Kathryn leaving Toronto soon just a scant four years after she arrived here, I’ve got to make the most of the time I have left with her. Though she’ll only be a couple hours away by car, our shooting opportunities will be more limited with all that distance.

The other night we headed off on foot through the downtown core of Toronto, in search of any storefronts that might have some colourful neon lights. Luckily, the city obliged. Because it was possible we’d be walking a long distance before finding anything, I packed light, arming myself with only my Nikon D750 (minus the battery grip), Nikon 50mm ƒ/1.4, and Nikon 85mm ƒ/1.8. I stuffed all this (with room to spare) in the rather diminutive Thule Covert Small DSLR Bag. Although it’s called a “DSLR Bag” and it fit my gear nicely, it’s probably better suited for a mirrorless camera system. My prime Nikon lenses were no trouble for the bag, but any of my heftier zoom lenses would not have been able to fit.

After traipsing along Queen West, we found our best opportunities after turning up Spadina and heading to Chinatown. Many of the shops and restaurants rely on gaudy neon or LED lights and signs to attract attention. Some were too bright, some too dark, so it took some trial and error to find the ones best suited for neon portraits. All of the LED signs, rope lights, and other novelties were pretty much a write off: too bright, too flashy. The neon, though, was perfect.

Toronto’s “main” Chinatown is one of six (!) in the Greater Toronto Area and has existed since the 1890s. Thanks, Wikipedia!

The wider sidewalks in Chinatown were useful too, as I was more easily able to snap neon portraits of Kathryn without getting in the way of other pedestrians. Among my favourites from our series are the ones below with the cool blue-toned pedestrian crossing in the background. I had my back up against the front window of a restaurant for these, and Kathryn was lit by the giant neon lobster hanging in said window.

One particular challenge when photographing neon portraits is similar to the challenges of shooting under fluorescent lighting. These types of lights have a “flicker” to them, undetectable by the human eye, but very noticeable when using a camera. If you think about the light pulsing, or traveling in repeating waves, you’ll get a better idea of what’s happening. Two rapid, successive clicks of the shutter can produce very different images, where different segments of the photo are illuminated from one split second to the next. Every time I took two photos, one would show Kathryn’s face perfectly illuminated, and the next she would be in darkness. Once you’re aware of this quirk, it’s easy to work around (just snap more photos and hope one of them syncs up with the flicker), but it’s a bit of a mind warp at first if you’re not aware of it.

Eleven-thousand steps later (so says my Fitbit), we were back at Kathryn’s front door and our journey was complete. Once I got these images into Lightroom, I shifted the colour on some of them significantly. Though many of the images initially had an extremely warm red-orange glow, I shifted this to pinks and blues where possible for a softer look.

Click/tap photos below to enlarge 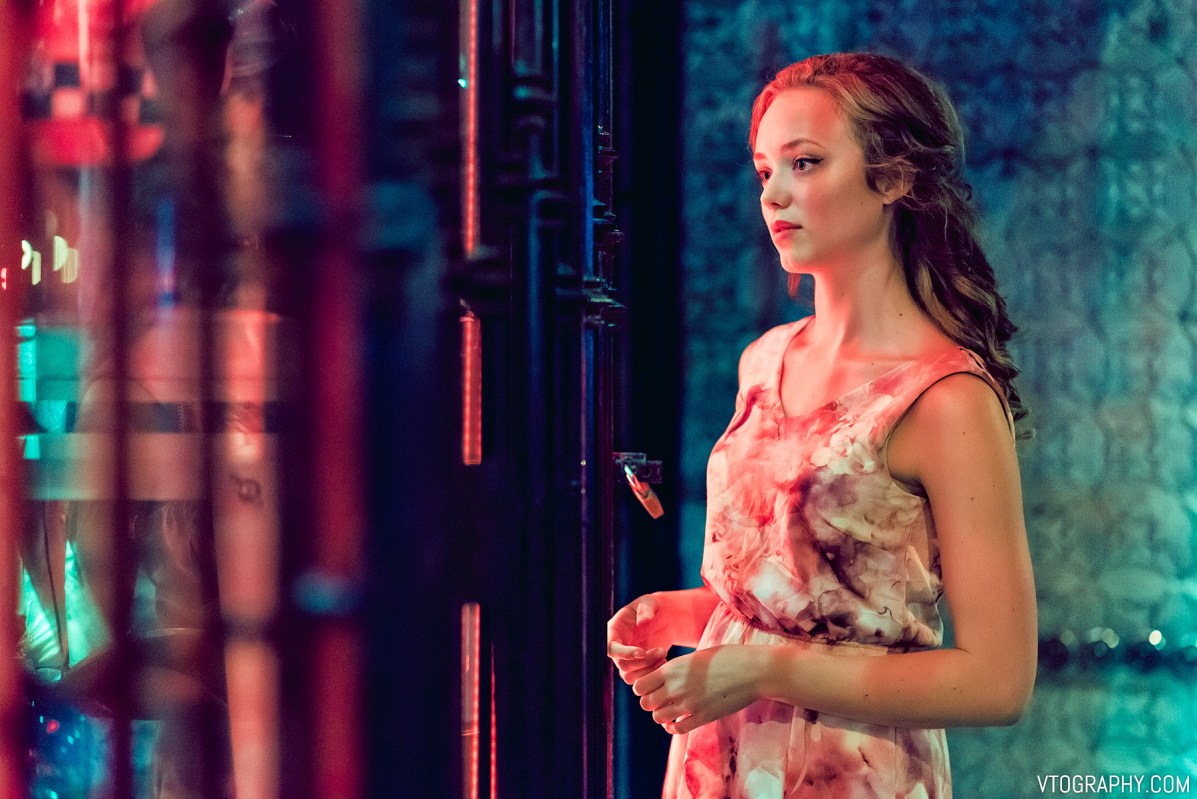 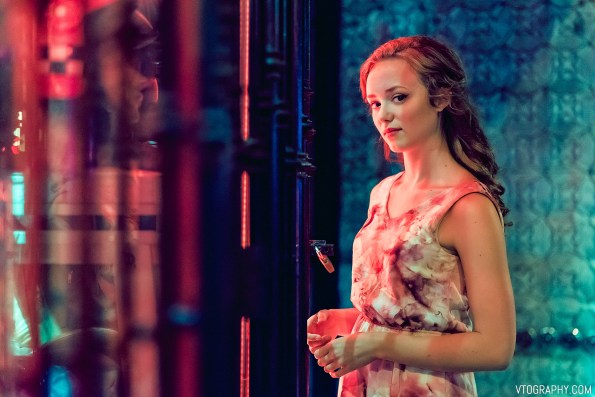 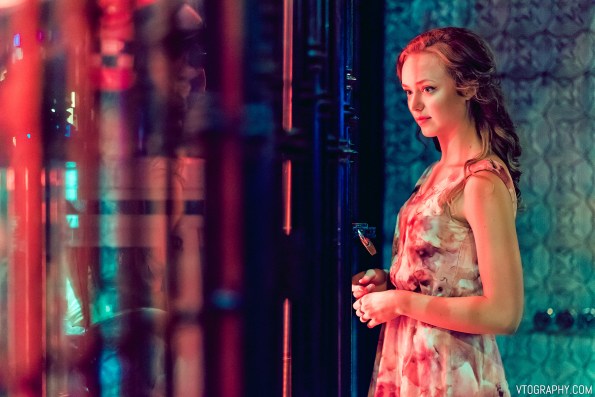 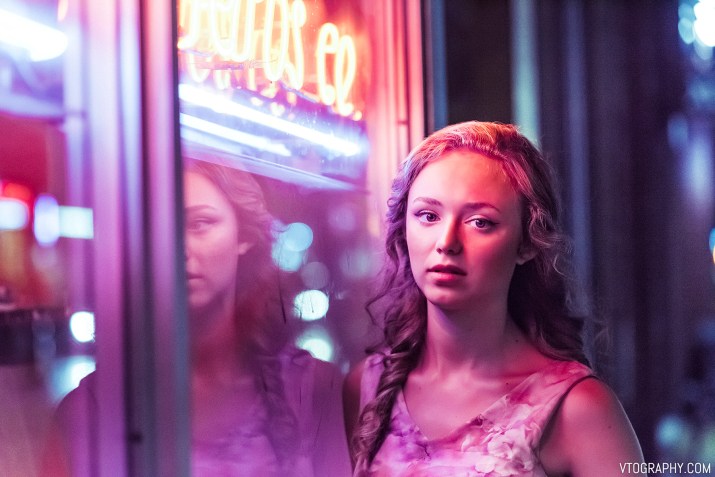 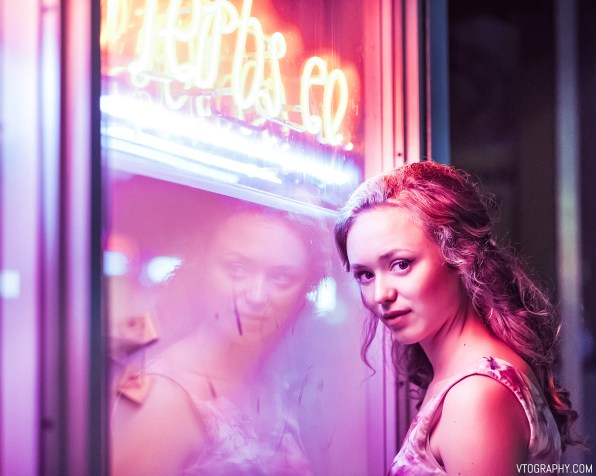 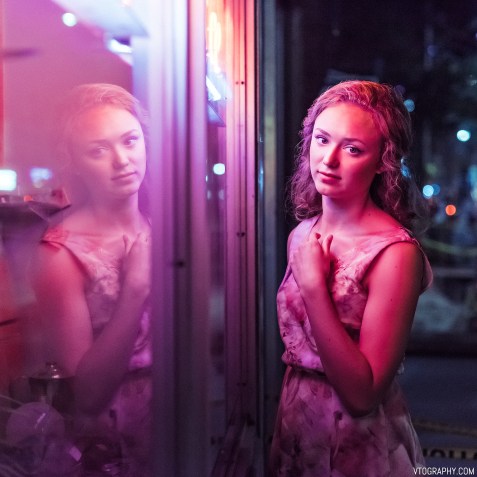 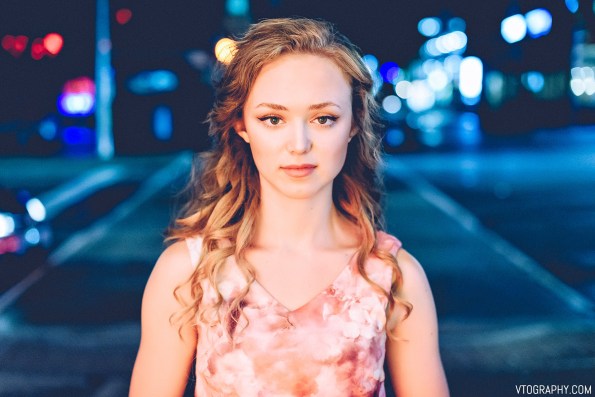 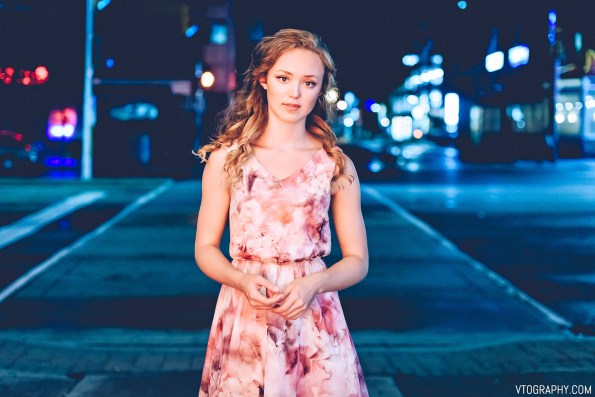 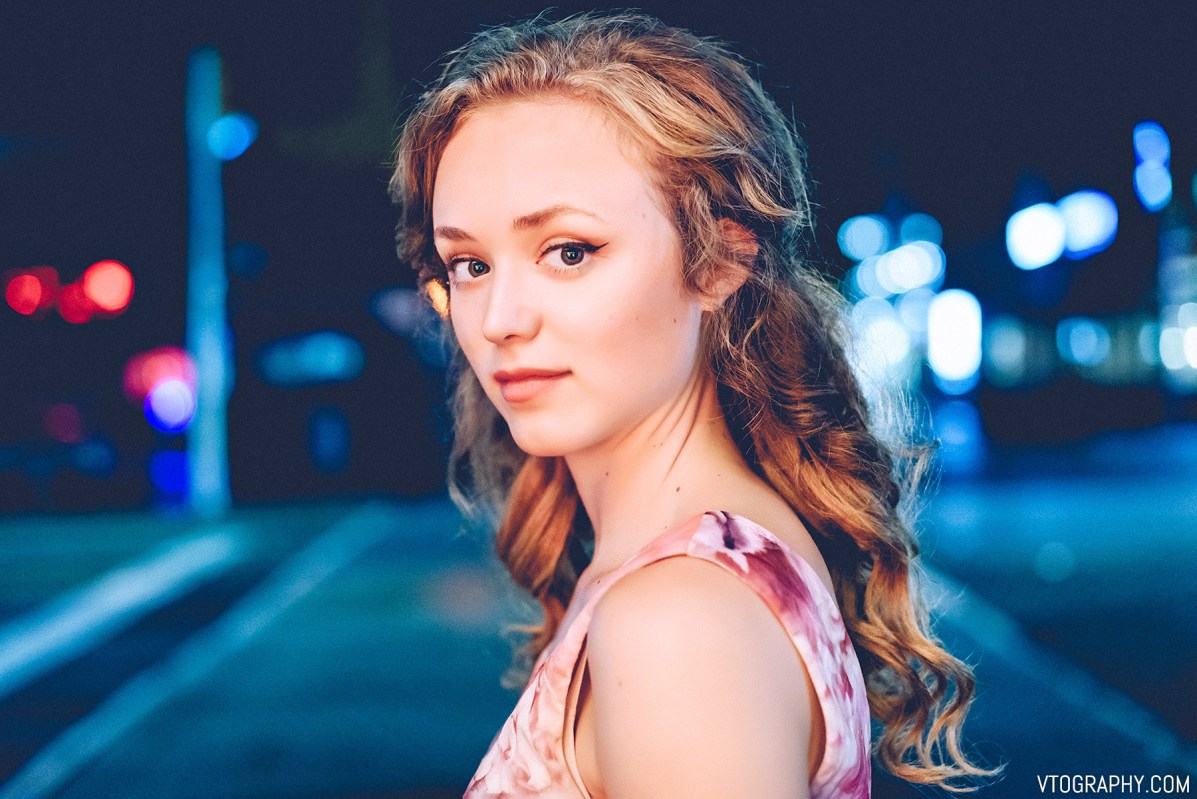 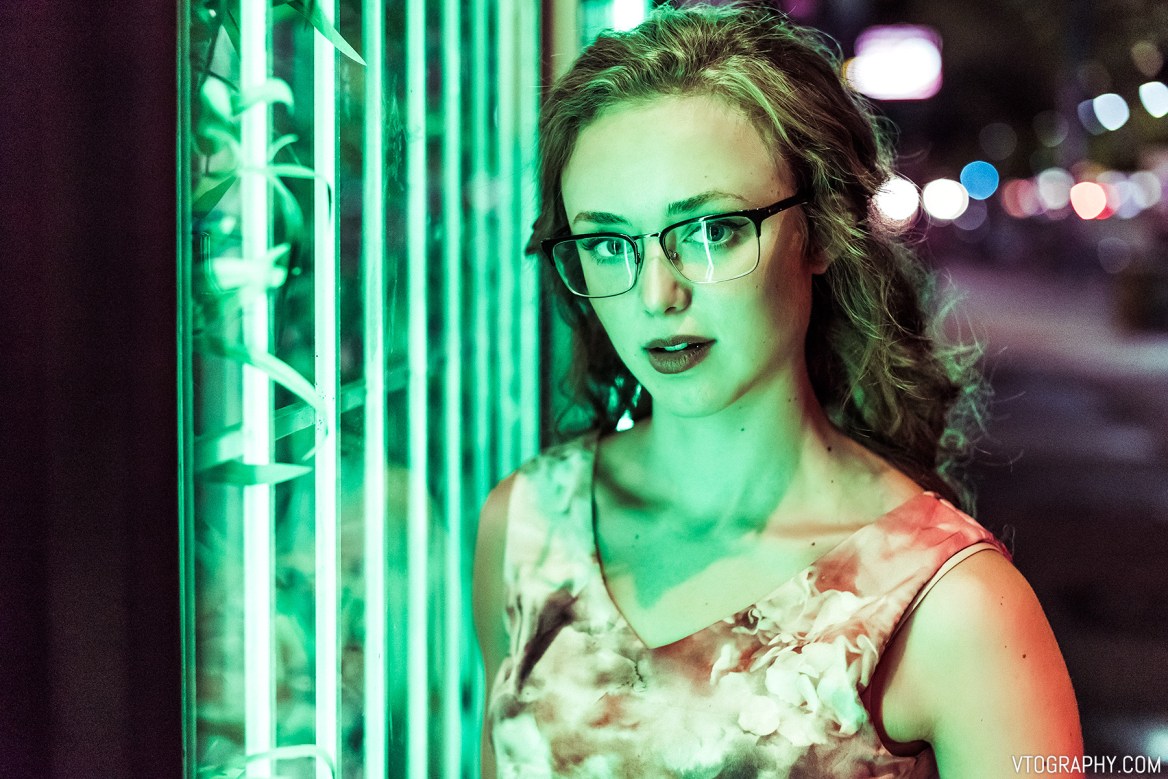 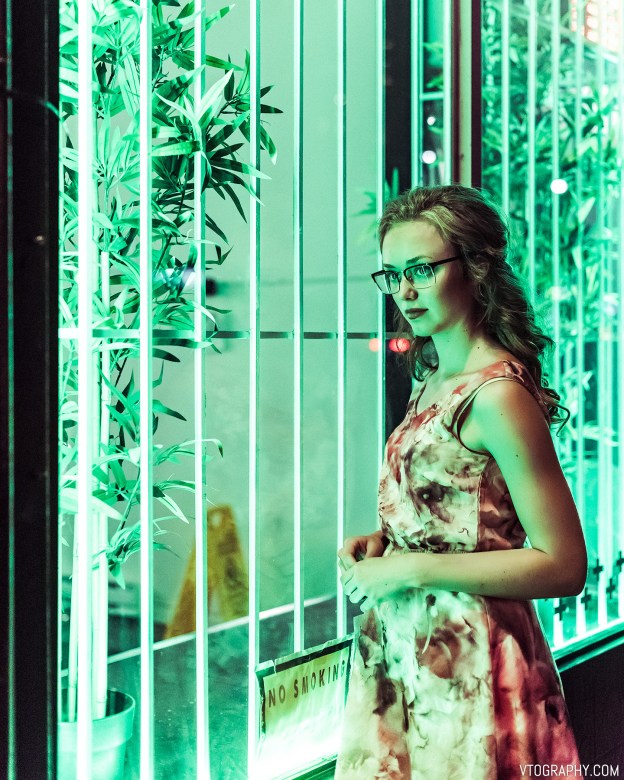 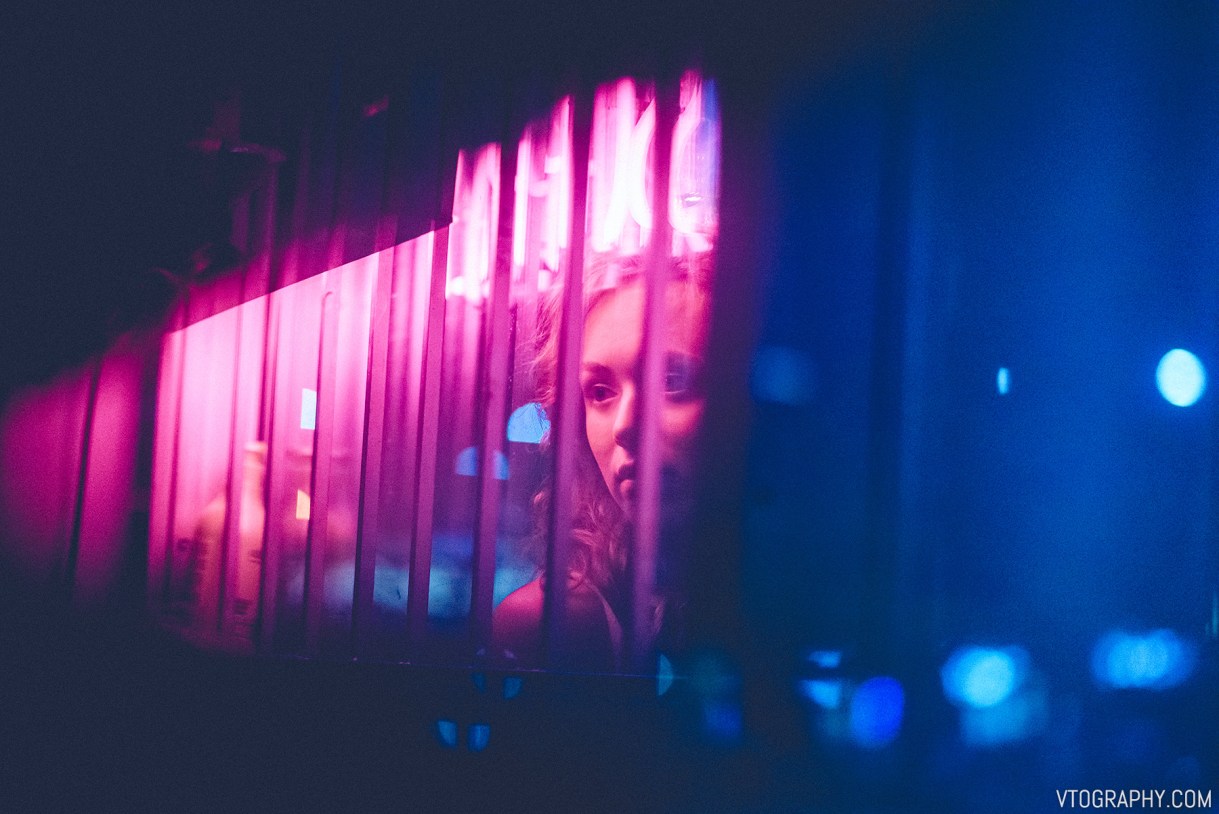 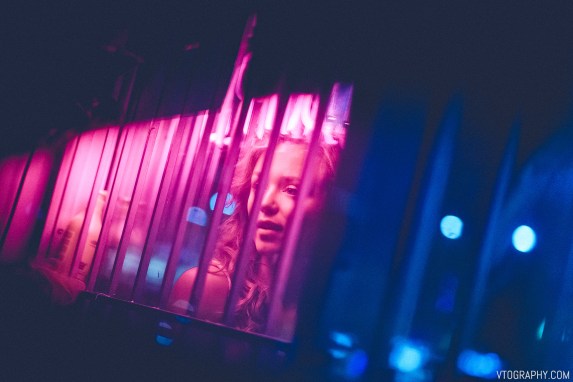 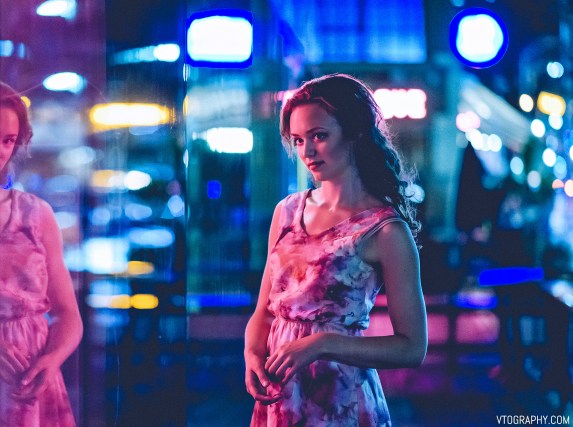